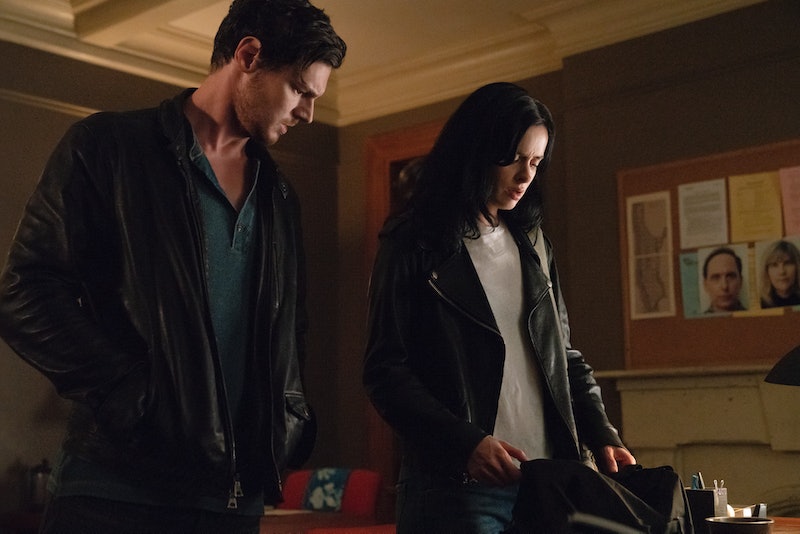 Spoilers for Jessica Jones Season 3 ahead! While Jessica Jones Season 2 ended with the anti-hero settling into a new relationship with her building super, a new man has entered her personal and professional life in Season 3. Who plays Erik on Jessica Jones? Benjamin Walker is more than a casual hookup in the gritty superhero series.

His character on Jessica Jones is a bit of a mystery. Erik with a "k" is a popular name in Marvel comics, oddly enough. There's Erik Killmonger, the Black Panther villain, Erik Lensherr the X-Men antihero more commonly known as "Magneto," Erik Josten also known as Power Man — an alias also used by Jessica Jones' former love interest in the Netflix series (and husband in the comics) Luke Cage. However, it appears that Walker is playing Erik Gelden, also known as Mind-Wave, a psionic anti-hero/sometimes villain from the Daredevil and Punisher comics.

As for Walker, he is a singer, songwriter, and New York comedian as well as an actor who used to host a stand-up/sketch/variety show called Find The Funny in the city. He is currently starring on Broadway in a revival of the Arthur Miller play All My Sons, and was nominated for a Tony Award for that performance.

It's hard to get a read on Erik, which is definitely intentional. Based on the cult classic roles he usually plays, Walker is perfect for a little romance... and a little murder, too.

You probably know Walker best from this supernatural action horror film adaptation of Seth Graeme-Smith's mashup novel, in which he played our tallest president.

Lincoln was the only president that Walker has played, either. Before Hamilton combined the 18th century American history with hip hop and R&B on Broadway, the musical Bloody Bloody Andrew Jackson was an emo take on the 19th century — and Walker played the titular role.

If blood-splattered musicals and/or vampire killers aren't your thing, you may recognize Walker from this Nicholas Sparks adaptation.

Walker has also appeared in historical dramas like In The Heart Of The Sea with Chis Hemsworth, Kinsey, and Flags of Our Fathers. His other stage credits on Broadway include Cat On A Hot Tin Roof in 2013 opposite Scarlett Johansson, Inherit the Wind, and Les Liaisons Dangereuses.

See how it's kind of difficult to place his Jessica Jones character? You never really know what you're going to get with Walker: violence or otherwise. However, while we're on this Youtube rabbit hole together, we might as well live our best lives with just a little more singing. Jessica Jones is about as far from a musical as it gets, and she definitely wouldn't take to being serenaded, so enjoy it.

More like this
The First 'Percy Jackson & The Olympians' Teaser Comes With An Ominous Warning
By Grace Wehniainen
Nicola Coughlan Shared A Lady Whistledown Excerpt From ‘Bridgerton’ Season 3
By Grace Wehniainen, Alyssa Lapid and Sam Ramsden
A New 'And Just Like That' Table Read Pic Confirms A Key Character's Return
By Jack Irvin and Grace Wehniainen
You’ll Definitely Recognise Both Of Ty Tennant’s Parents
By Maxine Harrison
Get Even More From Bustle — Sign Up For The Newsletter