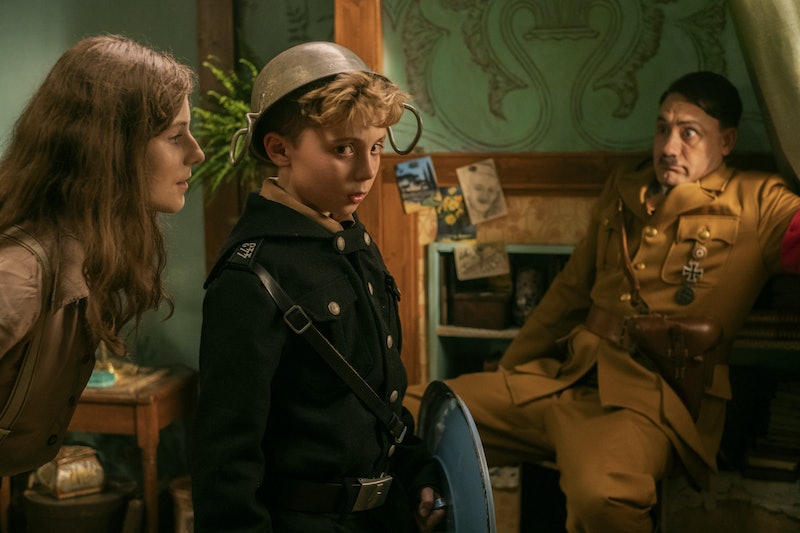 Set during World War II, Jojo Rabbit is about a 10-year-old Hitler Youth who is so passionate about his Nazism that he has Adolf Hitler as an imaginary friend. It's a peculiar role to take on, but one young actor took the plunge and brings life and sympathy to the character. In Jojo Rabbit, Roman Griffin Davis plays Jojo (aka Johannes Betzler), and it's actually the young actor's very first film role.

In an interview with ODE at the London premiere of Jojo Rabbit, Davis explained that he ended up getting cast, in part, because he was in the right place at the right time.

"I was in LA, because my dad was working on a Marvel film," he told ODE. The young actor's father is cinematographer Ben Davis, who has worked on a number of Marvel movies, including Avengers: Age of Ultron, Doctor Strange, and Captain Marvel.

Davis, who is from Sussex, "the boring part of England," as he put it, continued, "My godmother, my mom’s best friend, works at Fox, so we went to go say hi to her colleagues, and they were like, 'Have you auditioned for Jojo Rabbit?' I was like, 'Is this a Peter Rabbit sequel or...?' Davis added sarcastically, "It's a bit different."

While his encounter at Fox (Fox Searchlight produced the film), led to him landing the role, Davis was already dreaming about becoming an actor before that. According to his bio on IMDb, which was written by his mother, Camille Griffin, he got an agent when he was nine and had already been auditioning for parts.

Now, with writer/director Taika Waititi's latest feature (the filmmaker also plays the imaginary Hitler), Davis has joined both his parents in the movie business. In addition to his dad's work as a cinematographer, his mom has written and directed several shorts. She also worked in the camera department on several feature films, including Star Wars: The Phantom Menace and Layer Cake.

Davis was excited to be chosen for this lead part in Jojo Rabbit, but being on set was scary at first. "It was terrifying," he told IMDb at the Toronto International Film Festival. "But Taika was really supportive and so were all the other actors, so that helped me a lot. And it was also interesting. It was really interesting, so I didn't really think about it being the first [movie for me]."

The overall tone of Jojo Rabbit is pretty light and funny, but it's still centered around incredibly heavy subject matter. ODE asked Davis if he was surprised to hear what the film was about, and he responded, "I feel like this is a very important part of history, which should not be forgotten and [we] should always be reminded of how hate can really harm people." He added that the movie could be a way for his classmates to learn more about the Holocaust and the Second World War.

Davis doesn't have any other upcoming projects listed yet on his IMDB, but it seems like that chance encounter in LA will eventually lead to a long and varied career.