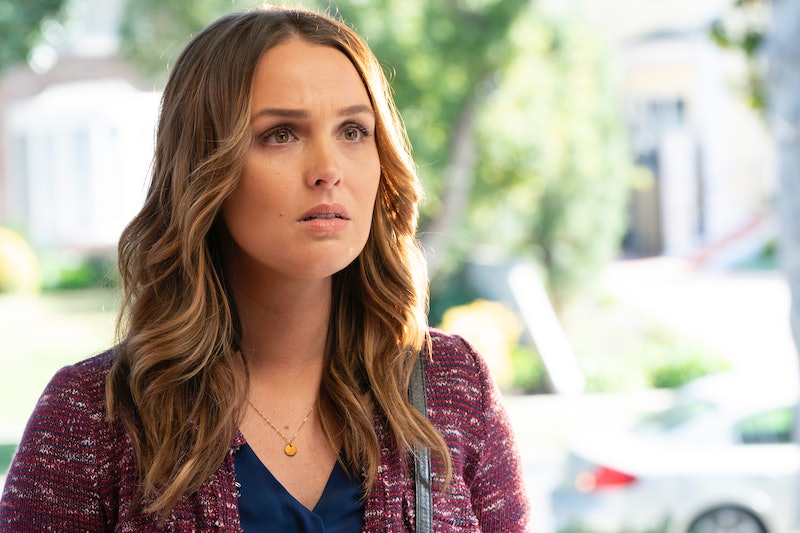 Romantic relationships can be complicated, but parental relationships aren't that far behind, which is something Jo may learn firsthand in the not-too-distant future on Grey's Anatomy as the search for her birth mother continues. But who plays Jo's mom on Grey's Anatomy? This person has the power to shake this show to its very core. Though the character has yet to make an official appearance on the series, eagle-eyed fans from last week's episode couldn't help but note the brief glimpse we were given of Jo's birth mom, thanks to Casey Parker's internet sleuthing.

The image wasn't showcased for very long, but many thought that the person in question looked a lot like actor Michelle Forbes, who is set to guest star on Grey's this season in a mysterious role. No details about her character were provided, leading many to suspect she could be Jo's estranged mother. And now that we have some photographic evidence, that does, in fact, look to be the case. But while Forbes may be a newcomer on Grey's, this certainly isn't the first time she's graced our television screens in the past. So even if you don't immediately recognize the name, you should definitely know her face.

True Blood fans may instantly recognize Forbes for her portrayal of Maryann Forrester, while others might recall her as Mitch Larsen from The Killing. However, her impressive TV resume doesn't just stop there. Forbes' acting credits includes stints on Orphan Black, Guiding Light, Star Trek: The Next Generation, Homicide, The District, 24, Battlestar Galactica, Prison Break, In Treatment, Chicago Fire, The Returned, Powers, and Berlin Station, just to name a few. So in case you had any doubts on Forbes' abilities, be rest assured that she's more than capable of tackling this complicated and compelling role.

Back in Season 9, Jo opened up about her past, revealing that she had been abandoned when she was just a baby and grew up in the foster care system and even lived in a car at one point. She explained:

"My mother left me at a fire station when I was two weeks old. I got bumped around foster homes 'til I was 16, when I took matters into my own hands and started living out of a car."

Up until now, Jo had never even wanted to search for her birth family or know anything about them. However, now she's closer than ever to connecting with that part of her past. As Casey discovered, Jo's mom is Vicki Rudin and currently resides in Pittsburgh. The idea of finally meeting her mother and getting some much-needed questions answered may prove to be too great of an opportunity for Jo to pass up.

It's unclear how long Forbes and her character will be sticking around for on Grey's, but it'll definitely be an interesting storyline to see unfold. Let's just hope that it doesn't end in heartache for Jo. She's already been through enough. Then again, this is Grey's Anatomy, so anything is possible.