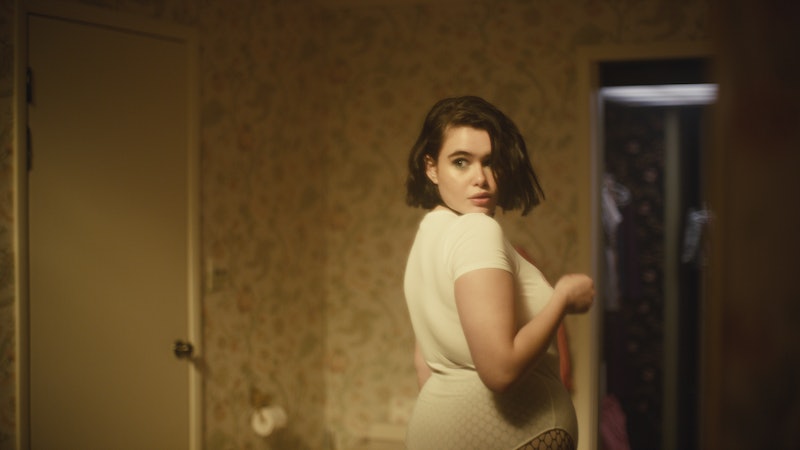 HBO's Euphoria features a number of young stars, but Barbie Ferreira, who plays Kat, shines in the June 30 episode. No, she's not related to pop singer Sky Ferreira, but she is an actor, model, and all-around up-and-comer in the world of fashion and entertainment. And thanks to Euphoria, this could be her breakout moment.

For Ferreira, working on the show has been a huge learning experience. "It's been a lesson, a boot camp for actors, and a great safe space where we've all been learning and growing," the 22-year-old told Vogue in March. "Kat and I are really similar. She's exploring herself and what it means to be a girl who doesn't fit in the same boxes as the people around her. I based it on how I was at 16."

As Kat's story continues to play out, here are a few things to know about the actress bringing her to life.

She Got Her Big Break In An Aerie Campaign

Ferreira made headlines back in 2016 when she starred in an unretouched campaign for Aerie. "Not being retouched in the images is something that very important to me," she said in the video. "People knowing that that's what I look like without anyone's perception of what my body needs to look like."

The model has also appeared in campaigns for American Apparel, H&M, Outdoor Voices, Adidas, and more. As she told Paper, it took her a long time to become comfortable in her own skin. "When I was 16 and I started modeling, I was very insecure about myself to the point where I didn't wear any revealing clothes," she said. "Everything was strategically placed on my body to hide my love handles, you know, just very specific. When my first modeling pictures came out, it was totally new to see someone who was a bigger girl in something that wasn't necessarily a plus-size brand."

She Hosted A Webseries For Broadly

The Euphoria actor had a webseries for Vice's now-defunct vertical, Broadly. The show, How to Behave, depicted Ferreira interviewing experts on different topics, which ran the gamut from finance and body positivity to telenovelas.

"Curvy and plus-size models will just be models once it becomes more normalized and we get more representation and people are used it and not shocked by it," she told Time in 2016.

This Is Only Her Second TV Role

Her first was in Sarah Jessica Parker's HBO dramedy Divorce, in which she played a character named Ella. As she wrote in an Instagram caption, the role was a huge deal for her and something she'd wanted for a long time. That her second turn on HBO is as a much more prominent character speaks to her obvious charisma and acting talent.

Ferreira recently switched agencies to Ford Models and has moved to L.A., per Vogue, where she's pursuing acting. So it's clear that entertainment is her priority right now. "I've been talking about wanting to be an actor since I was literally 13 on the internet," she told the magazine. "Now I get messages from friends saying, 'Oh my god, I can't believe you did that because you've been talking about it for almost 10 years,' and I'm like, yeah, and I worked my butt off to get here! I think it's not as unheard of as people make it seem."

After Euphoria wraps its first season, all eyes will be on Ferreira to see what she does next.