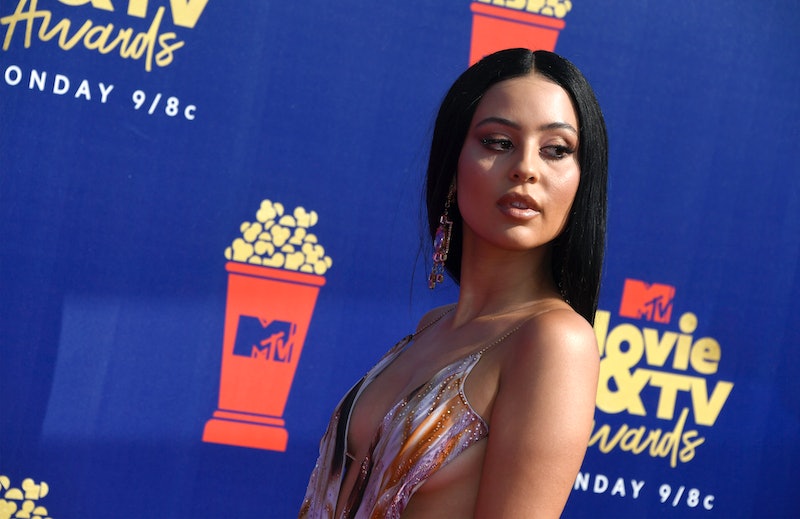 The teens of HBO's Euphoria may be in near constant crisis, but the actors playing these characters are thriving —especially when you consider that this is a first gig for some of them. One of the newbies is Alex Demie, who plays Maddy on Euphoria. According to the HBO website, Maddy is "confident, combative, [and], Nate's on-and off-again girlfriend" who "finds herself bearing the weight of Nate's emotions."

In an interview with V Magazine in November of 2018, Demie described Maddy as "the female Patrick Bateman, minus the killing. It's the craziest sh*t I’ve ever read in my life. I can't say much, because people are trying to hack into all our emails to get the scripts. But the music is incredible and the visuals will be stunning." That was before the show premiered in early June — now that fans have gotten a look at the series, it's clear that she wasn't exaggerating. Literally everything about this series is captivating. Especially Demie's performance, though this is one of her first lead TV roles.

Outside of acting, Demie does a little bit of everything — she's a self-described mogul. "I made costumes for Nicki Minaj," she said in the same V interview. "I had a sunglasses line, and I ended up getting Japanese investors. J. Lo, Nicki Minaj, and Amber Rose ended up wearing them. They were in Vogue Korea." She also plays guitar, sings, and directs music videos.

Demie has had a strong start as a working actor, with a handful of television appearances in prestige series. She and Euphoria star Zendaya were both in The OA Season 2, but didn't share scenes together. Demie was in a couple episodes of Ray Donovan and Love as well.

She will reunite with Lucas Hedges, her mid90s costar, in Waves. The film, written and directed by It Comes At Night's Trey Edward Shults, also stars Sterling K. Brown and Taylor Russell. According to Variety, this film is "a dramatic musical with a fresh spin" that will be completely synchronized to music — which shouldn't be a problem given her knack for performing.

Yup, she's also a singer-songwriter. The above video shows Demie performing in Paris. Her single, "Girl Like Me," is available to stream or purchase, and she's also featured on the Pearl album Closer.

"I've always known from a young age that I was meant to have multiple careers," Demie said in an interview with W Magazine. Luckily, so many of those ventures have had amazing success! "It's weird because I'm still like, "'Has it hit me?'" she added. She's already being labeled a breakout in Euphoria; surely, there will be a lot more from her to come.