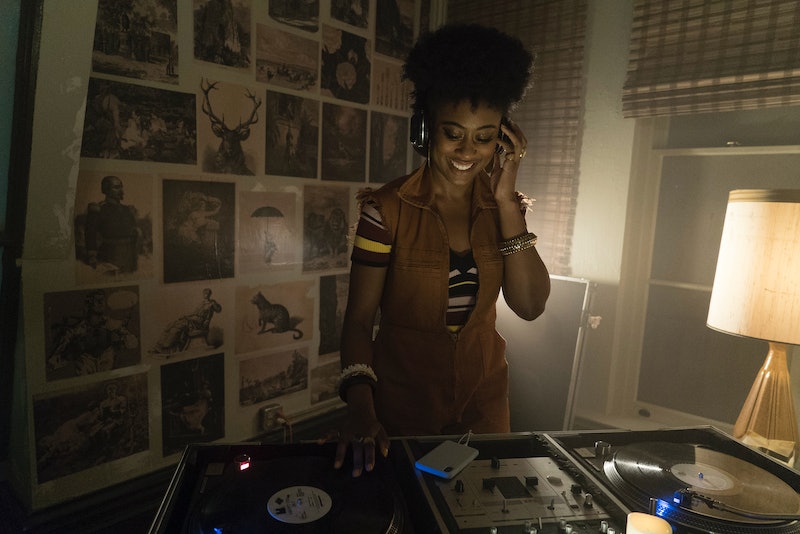 Callie and Mariana have left the warm nest of The Fosters and are striking out on their own — to downtown Los Angeles, that is. Good Trouble follows your favorite sister duo post-college, where they’re forced to get jobs and move out. Like any other twenty-something, they’re already finding out that life isn’t always a box of chocolates, but luckily, they’ll have some help in getting through it. Who plays Malika on Good Trouble? Zuri Adele is making a splash as the social-justice activist.

Callie and Mariana meet Malika pretty early on in the show, as Malika lives alongside them in The Coterie, the commune-meets-dorm that Mariana signed them up for. Callie isn’t happy about it at first, but having Malika and the rest of the dwellers there is what Callie needs to get her out of her own shell. Malika is a former foster child, just like Callie and Mariana, and she focused on energy on activism for Black Lives Matter and other social causes. Callie and Malika will definitely duke it out in the first season of Good Trouble, as Callie’s clerking for a conservative judge hearing a very controversial police brutality case, and Malika wants Callie to do whatever she can to influence the outcome.

Zuri Adele, who plays Malika, got her start on the CBS series Under The Dome before starring in a few short films. She has a Bachelor of Arts in Drama from historically black Spelman College, as well as one from BADA in London. She also has an MFA in Acting from UCLA, so it’s safe to say that Adele knows her stuff.

In an interview with Shadow And Act, Adele said Malika is a fighter. “She's really fierce, really strong, and she moves through and continues to move through a lot of trauma in her life, and she perseveres like no other,” Adele said. As for Malika’s backstory, she mentions in the pilot of Good Trouble that she was also a foster child, but she wasn’t fortunate enough to get adopted into a family like Callie and Mariana were. “Malika's experience as a foster kid was very different from Callie and Mariana's experiences as well,” she said. “So there are a lot of mirrors being held up and different levels of, I would say, privilege in the foster care system that are being shown [on Good Trouble].”

In an interview with Sheen, Adele explained that Malika’s activism has spilled over into Adele’s personality IRL. “She is bold and self-expressive. She speaks up for herself and is independent. I’m very independent, too. We have that in common,” Adele said. “[Malika] really lit a fire under me to speak up for myself and trust that my life is absolutely as it’s supposed to be.”

Though Malika will definitely be a good friend for Callie and Mariana, she’ll definitely challenge them, too, and force them to look further. “We're telling the stories of so many different characters on the show, it's giving us a glimpse at...how much social justice there is to fight for,” Adele told Shadow And Act. “But it's allowing us to zoom in on what's happening right now. It's directly related to what's going on right now, so it's such an honor to play this character in this time and age.”

Malika’s viewpoint is an important one on Good Trouble, and she’ll definitely be fun to watch as Adele lets her story unfold.

More like this
Ashton Kutcher Wants Danny Masterson “To Be Found Innocent” In Rape Retrial
By Jake Viswanath
Pamela Anderson's Sons Brandon & Dylan Have Their Own Hollywood Careers
By Arya Roshanian
'The Queen’s Gambit' Season 2 Tweet Wasn’t From Anya Taylor-Joy
By Mary Kate McGrath, Jack Irvin and Grace Wehniainen
Linda Ronstadt’s “Long Long Time” Plays A Pivotal Role In The Last Of Us
By Brad Witter
Get Even More From Bustle — Sign Up For The Newsletter
From hair trends to relationship advice, our daily newsletter has everything you need to sound like a person who’s on TikTok, even if you aren’t.