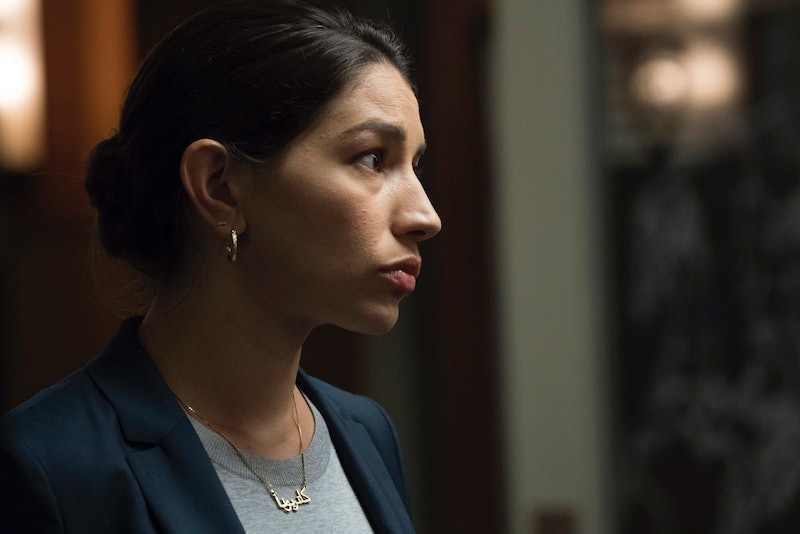 After Detective Sonny Carisi (Peter Scanavino) left to work for the District Attorney, there was a vacancy on the Law & Order: SVU team that needed filling. Enter Detective Katriona Tamin, played by Jamie Gray Hyder on SVU, a law enforcement officer who's "motivated by social justice and attached to her community," according to an interview the actress did with TV Insider. While originally listed as a recurring guest star for the show's 21st season, she's being promoted to full-time cast member as of Episode 8, entitled "We Dream of Machine Elves."

Hyder admitted she found one aspect of Kat's character particularly relatable: how intimidated she must have felt initially upon joining the SVU team. "She has to fit in with a new group of people just like I do!" she told TV Insider.

Thankfully, Hyder is no stranger to TV roles. The 34-year-old has had major roles as Danielle on True Blood and Lucia Solano on Graceland, just for starters. She's also made guest appearances on Chicago Med, Bones, Criminal Minds, and NCIS, among others, according to her IMDB page. She even branched out into voice work recently, playing Zethrid in Voltron: Legendary Defender.

However, joining Law & Order: SVU, now in its 21st season, is perhaps Hyder's most important role yet. Kat is a New York City native who cares deeply about protecting the underdogs, like people of color, those experiencing poverty, and other underprivileged groups.

"Kat identifies 100 percent," Hyder explained to TV Insider. "She was raised in the projects and knows there's not a high priority on crimes in low-income areas."

Because of this, viewers often see Kat speaking up for and sympathizing with marginalized victims, as we saw happen in "At Midnight In Manhattan" when the detective came to the aid of a transgender woman and sex worker who was assaulted by a customer. This is just one example of Kat's staunch support of victims who need it most.

It's unclear where Kat's storyline will go in Season 21 and possibly beyond. The former Vice officer turned SVU transfer is still relatively new to the team and therefore has a lot to learn about how things work in the department and plenty of room to grow in her career and her personal life. She'll no doubt make some missteps and experience some hardships as she adjusts to the intense pressure and emotional toll working in SVU can take on its detectives, many of which audiences will hopefully get to see on screen.

Thankfully, Kat is working under the legendary Olivia Benson (Mariska Hargitay), so she stands a pretty good chance of becoming the best possible detective she can be.