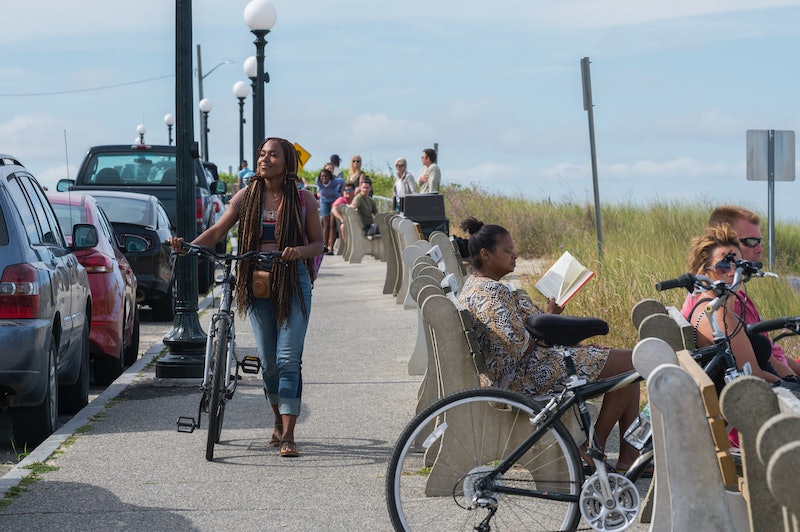 Nola Darling is finally back for more adventures in She’s Gotta Have It Season 2, premiering on May 24. Fans have been impatiently waiting for new episodes after devouring the show’s first season way back in November 2017. As expected, Nola, Jamie, Mars, and Greer will return but there’s also a new character who is coming in to shake things up. Michael Luwoye plays Olu, the latest guy that Nola has a connection with in her ever-complicated balancing act of her career and poly-amorous love life.

According to his management company biography, Luwoye is a first-generation born Nigerian-American who hails from Huntsville, Alabama. He graduated from the University of Alabama in 2013 with an arts degree and moved to New York to pursue his dreams. Luwoye performed in several plays including Marley, Once on This Island, and Invisible Thread and made appearances on shows like The Magicians and Curb Your Enthusiasm until he got his unexpected big break in one of Broadway's most recent and biggest pop culture phenomenons.

Per Playbill, the actor auditioned for the role of Hercules Mulligan/James Madison in Hamilton, but he was instead offered a spot as the alternate for the title role of Hamilton in 2016 after Lin-Manuel Miranda left the show. The actor was the first Black person to be Hamilton and, according to Broadway.com, he portrayed both Hamilton and Aaron Burr (he was an understudy for the role) in the same day in November 2016. Luwoye was also Alexander Hamilton in a U.S. tour production from March 2017 to December 2017 and returned to Broadway shortly afterward in the same role which he recently left in February 2019.

Interestingly, his new co-star Anthony Ramos Martinez a.k.a. Mars Blackmon, is also a Hamilton alum who portrayed Phillip Hamilton prior to Luwoye’s casting, as reported by The New York Times. Now, he’s moving into a completely different direction as Nola’s love interest as well as a role on the upcoming NBC legal drama Bluff City Law.

Luwoye announced both of his new roles to his Instagram followers and said he was excited about all the new beginnings he will experience in 2019. Right now, there’s not a lot of information about his She’s Gotta Have It character, which just makes Hamilton fans want to tune in even more. Olu makes a very brief (and almost unnoticeable) appearance in the She’s Gotta Have It trailer towards the end, but there’s no doubt that this connection will be intriguing. The trailer reveals that Nola and Opal have become more exclusive, but Nola is famously averse to monogamy so that’s probably where Olu comes into the picture.

Michael Luwoye's character Olu will either drive Nola and Opal apart, bring them closer together, or even help Nola realize another profound truth on her journey towards figuring out her dreams, goals, and how to make her love situation flow smoother. And, hopefully this season will get her one step closer to truly finding her happy place in all areas of life.

More like this
The First Trailer For 'That '90s Show' Includes So Many Nods To The Original Series
By Jack Irvin, Alyssa Lapid and Grace Wehniainen
Here’s How 'The Crown' Will Cover Princess Diana's Tragic Death In Season 6
By Brad Witter
This Tiny Clue In 'Wednesday' Foreshadowed That Season Finale Twist
By Grace Wehniainen
Jenna Ortega Wanted To Redo The 'Wednesday' Dance Scene For A Controversial Reason
By Grace Wehniainen
Get Even More From Bustle — Sign Up For The Newsletter