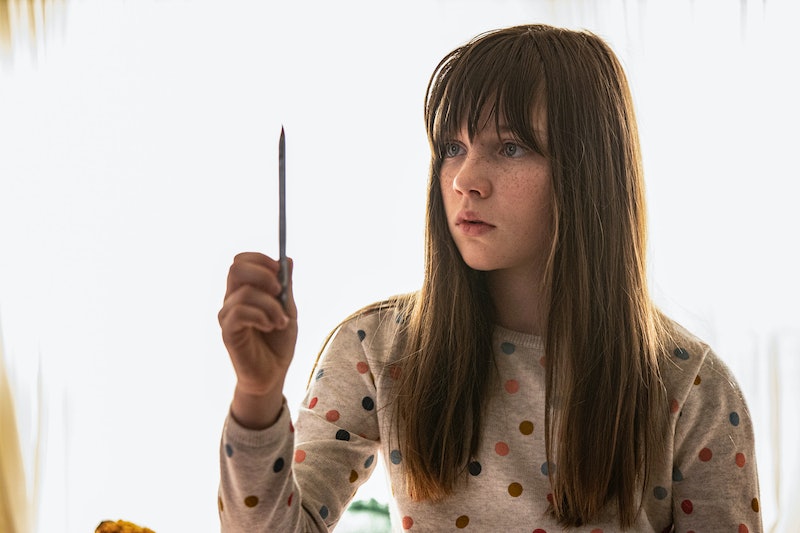 ABC's new thriller, Emergence, centers around a girl named Piper who's found at the site of a mysterious plane crash with no memory of what happened or who she is. Things get more complicated from there: according to the network, as the police chief investigating the crash is drawn further into the case, she becomes entangled in "a conspiracy larger than she ever imagined." But as you wait for the series to get going and start providing a few answers, you might want to know more about the actress grounding the story: Emergence star Alexa Swinton, who plays Piper.

The show may mark Swinton's biggest role yet, but she's definitely no stranger to TV. According to IMDb, she's a distant cousin of Tilda Swinton, and started her career in 2012 when she played Ellie in four episodes of the series Mythos. From there, Swinton had small appearances on shows like Saturday Night Live and The Tonight Show Starring Jimmy Fallon. She also acted in several film shorts.

Swinton's big break came in 2016, when she was cast as Eva Rhodes in Billions. She's starred in 12 episodes over the past three years, giving her vital experience which likely did a lot to prepare her for her Emergence role.

"I think it's going to be such a fun adventure because there are so many ups and downs, turns, and twists, and you don't really know where it's going until it tells you where it's going," Swinton told ABC News of Emergence.

And she'll certainly have a lot to sink her teeth into. Not only does her character not remember anything about her past or the accident which killed everyone but her, but she also appears to have some pretty strange abilities — the limits of which no one seems to know just yet.

Then there's the fact that two people come forward claiming to be Piper's parents. Jo, the police detective who takes Piper in, isn't so convinced that they are who they say they are: because Piper is a child, it seems unlikely that she would have been traveling alone, and everyone else died in the crash. Why weren't her supposed parents with her? And if these people are lying, why?

"[Emergence is] about us unraveling the mystery of this child, where she gets her sort of unique powers," Allison Tolman, who plays Jo, explained to ABC News. "She has...let me think about what I can say that won't give anything away...she's got telekinetic powers."

Added Donald Faison, who plays Jo's ex-husband Alex: "We have zero idea where Piper comes from, she's found at a crash site. We don't know if she was on the plane, we don't know much about her, but we do know that she wasn't hurt and she's lost her memory."

Whatever ends up happening on Emergence, it seems pretty clear the show will be filled with twists and turns. When or if we get any answers remains to be seen, but hopefully, like Swinton, fans will be excited about the journey.