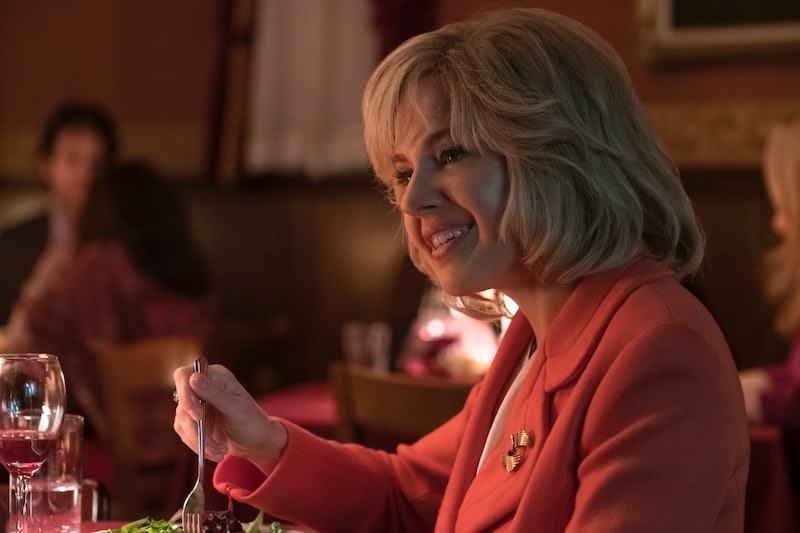 Showtime's The Loudest Voice focuses on the the final two decades on Roger Ailes' life and how his tenure as CEO of Fox News will affect the country for years to come. While Ailes was married multiple times over the course of his life, the timeline covered in The Loudest Voice focuses primarily on his third and final marriage. Throughout the course of the series, it becomes clear very quickly that Roger Ailes' wife Elizabeth Tilson, who was married to the CEO from 1998 until his death in 2017, was just as vital to the growth of the network as he was. Tilson is portrayed by Sienna Miller in the Showtime series and the American Sniper star is hardly recognizable thanks to prosthetic makeup.

According to her biography, Tilson started working at NBC News Radio and NBC News well before meeting Ailes, eventually moving to CNBC to work on launching the network in April 1989. She eventually moved her way up to the position of Director of Business Programming at CNBC, before becoming Vice President of Programming at America’s Talking, the predecessor to MSNBC. In 2008, she refocused her efforts in Putnam County, New York and became the owner and publisher of the Putnam County News & Recorder as well as the Putnam County Courier in New York.

Tilson's life is a remarkable rise in its own way, but The Loudest Voice seems most interested in how she affected Ailes' home life and supported his conservative ideologies, so don't expect a deep dive into her career off the bat.

It couldn't have been easy to portray the wife of such a controversial subject, both mentally and physically. Miller told Collider that transforming herself — quite literally — into Tilson was a monumental task that paid off in the end. "It was very, very liberating," she said. "And also really arduous to sit in a make-up chair for four hours, every day, sometimes for just walking into a room."

The miniseries is adapted from Gabriel Sherman's extensively reported book The Loudest Voice in the Room: How the Brilliant, Bombastic Roger Ailes Built Fox News-and Divided a Country, which also includes interviews with people close to the couple. However the Showtime series didn't have much participation from some of the real life people involved in the story. Russell Crowe, who plays Ailes, revealed to The Hollywood Reporter that he had attempted to reach out to Tilson, but she never responded to him. Miller had the same experience, telling Entertainment Weekly, "She was not open to being part of the show, for obvious reasons.There’s very little footage of her that I had access to. But there were these two speeches which she gave, which were on YouTube, and another little interview, so I really kind of based my research around that, and relied on the script because there’s just not a lot of information on her out there. But the interview and the speeches I found really revealing.”

It's understandable that Tilson might want to distance herself from the project, given that it takes a tough look at her late husbands alleged extra marital affairs and the sexual harassment allegations against him.

Still, for anyone who thinks that they understand Ailes life or his career, Miller's portrayal of his wife offers fresh perspective, for better and for worse.