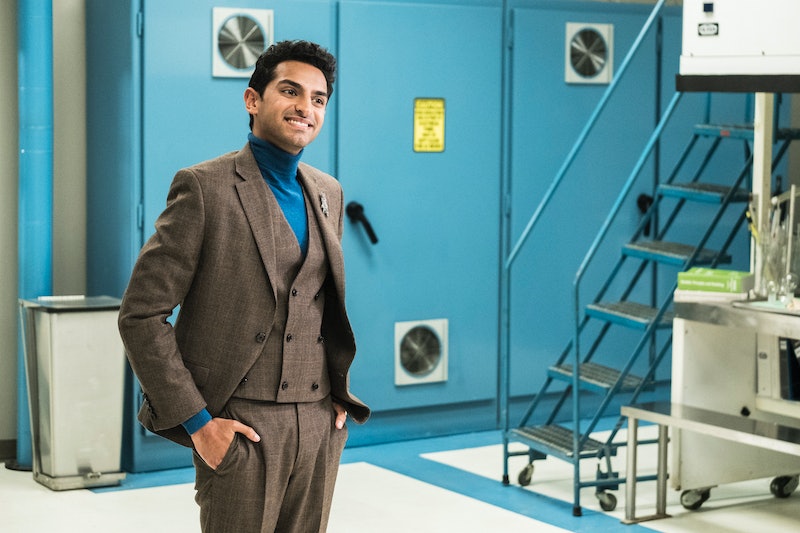 TBS' newly debuted afterlife comedy, Miracle Workers, imagines heaven as a bureaucratic mess. Steve Buscemi plays God, Heaven Inc.'s CEO who has grown bored with the very world that he created, and Karan Soni plays his assistant, Sanjay, who's trying desperately to hold everything together. After God makes a deal with newcomer Eliza (Blockers' Geraldine Viswanathan) and a lowly angel named Craig (Daniel Radcliffe) that if they pull off one impossible miracle in two weeks, he won't blow up Earth, Sanjay's job becomes even more stressful and chaotic.

At first glance, it's a role in line with Soni's past parts: he's previously played an array of sidekicks, lackeys, and nerds. His most prominent roles include "runt of the litter" Martin Bassi in Blunt Talk, IT Director Nate in Office Christmas Party, web developer Avinash "Nash" Dagavi in Betas, and his supporting role as the cab driver (and later, abductor and getaway driver) Dopinder in the Deadpool film franchise. But whereas Soni's characters tend to be down on their luck, Sanjay seems to have more going for him. Yes, God has him do all kinds of menial tasks, but one doesn't just become God's assistant on a whim, and it sounds like he'll begin charting his own path as the season presses on.

At the beginning of the show, Sanjay is forced to both humor God's plan and try to keep everyone from knowing that the creator of everything is having an emotional crisis of apocalyptic proportions. But Soni told Collider in an interview earlier this month that eventually, "Sanjay will "kind of reevaluate [his] whole life and everything changes."

Soni also had to do some reevaluating of his own after getting cast in Miracle Workers: he told Roku that his preparation for the role involved "going to FlyWheel and exercising a lot!" To play Sanjay as the "impeccably dressed and perfectly groomed angel" he was written as, Soni was told by the show's costume designer that he "would wear these amazing and very tight fitting" custom suits. "I left that fitting and jumped straight onto the first spin bike I could find," Soni told the outlet.

Still, Soni continued, it was fun to play someone so different from himself. "[Sanjay] walks into a room and demands to be seen and heard and says whatever is on his mind," he told Roku. "He is this brash, confident man on the surface but deep down he is desperate for human interaction and camaraderie. As an actor, it's very fun to play the back and forth of both those things. I would describe myself as a moderately confident person so playing someone with this level of unabashed confidence was so fun."

Soni's character may not be as central to Miracle Workers as, say, Craig or Eliza, but his role as Sanjay is a great demonstration of his own range as an actor. And not to mention, he is absolutely hilarious in the show. If you haven't seen him in anything else, this will definitely make you eager for more.