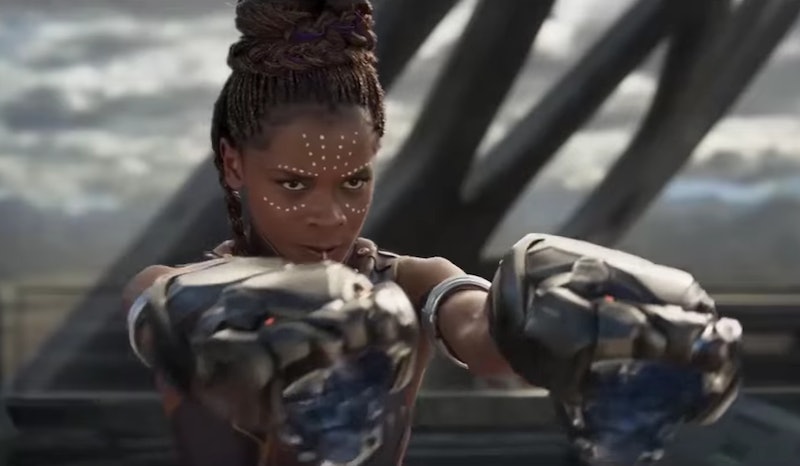 Black Panther, which hits theaters Feb. 16, introduces audiences to a character who puts Disney Princesses — and, well, pretty much everyone else — to shame. Her name is Shuri, and she's not just the Black Panther's sister, but basically the smartest person in the world. And the actor who plays Shuri in Black Panther is equally cool. The 24 year-old Letitia Wright portrays T'Challa's younger sister, and she's so awesome that the character deserves a Black Panther spinoff ASAP.

As you probably know — because you've most likely researched everything Black Panther while anxiously awaiting the movie's release — T'Challa, aka the Black Panther, is part of the royal family of Wakanda. That makes his younger sister, Shuri, a princess. Sorry, Meghan Markle, but Shuri might just be the coolest one ever to exist. That's because, as mentioned above, Shuri's incredibly smart, and she helps advance the technology in Wakanda, the most technologically sophisticated nation in the world. As Black Panther's producer Nate Moore told Collider, Shuri is "smarter than Tony Stark." That's seriously saying something.

It turns out that the actor who plays Shuri, Wright, is equally impressive in real life. Vanity Fair revealed that the Black Panther cast had rap battles on set — hopefully the cameras were rolling for them — and Wright had a tendency to win. "Danai [Gurira] tried a lot, but she failed, epically. . . . I’m still the queen of rap battle in Wakanda," the actor told the magazine.

Because Shuri is such an incredible character, people are already speculating that the heiress of Wakanda could get a spinoff soon after Black Panther. According to Vanity Fair, the Black Panther comics include Shuri succeeding T'Challa as the hero. It seems all but certain the Shuri could get her own spinoff as the Wakandan superhero someday, but according to Collider, the super-genius 16 year-old is also a contender to become the next Iron Man. The fact that Shuri is indeed smarter than Tony Stark suggests she'd be perfect for the role.

As for taking over the helm as Black Panther, Wright isn't revealing too much about that. "[Let's see] wherever the future goes," Wright told Digital Spy. "But right now we have a strong, amazing Black Panther — that's Chadwick Boseman — and he's here's to stay and he's amazing." Of course, Wright knows that without her character, Boseman's Black Panther wouldn't be so amazing. "I'm gonna keep making gadgets for him because I love my brother," Wright told Digital Spy.

Boseman will undoubtedly blow audiences' minds with his performance as Black Panther, and nobody wants to see him replaced — we just all want more Shuri action. There are plenty of options for how that'll happen, and as long as Shuri shows up in another Marvel movie soon, that's all that really matters.

Regardless of when — not if — Shuri's spinoff movie arrives, you will definitely see more of Wright in the future. The actor played a role in Liam Neeson's The Commuter, which came out in January, and she'll star in Steven Spielberg's upcoming action movie Ready Player One, which comes out in March She will also star in another highly-anticipated MCU movie, Avengers: Infinity War, which hits theaters in May.

Wright's Shuri is just one of many cunning female characters in Black Panther; the film also features Lupita Nyong'o, Danai Gurira, Angela Bassett, and more talented actors in major roles. Each of these characters has their own set of impressive skills, but there can only be one "smartest person in the world," just as there can only be one "Queen of rap battle in Wakanda." Those are Wright's titles, but she's likely to pick up a few more in the exciting acting career she has ahead of her.