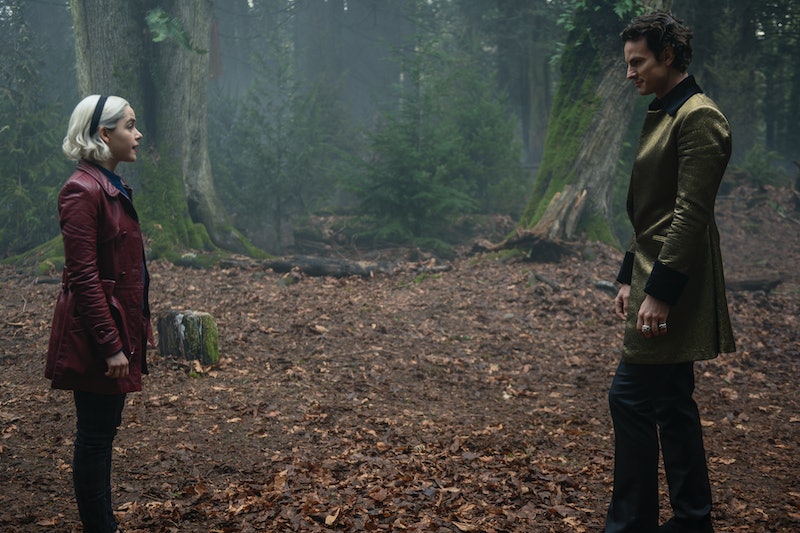 Spoilers ahead for Chilling Adventures of Sabrina Part 2. The Chilling Adventures of Sabrina introduced the Dark Lord as a horned beast back in Part 1, but apparently, he has a different form. Part introduces the original, human-like version of the Dark Lord, played by Luke Cook. And while he's just as diabolical as expected, he is much better looking.

Cook, an Australian actor, arrives in the final episode of Part 2. To say his character has a flair for the dramatic is a bit of an understatement: he loves gold cloaks, Phantom of the Opera, and secretly impregnating mortal women with his own spawn so that his child can one day fulfill a prophecy and rule by his side as the Queen of Hell.

For now, though, the Dark Lord is contained on CAOS, so let's get to know the man who's bringing him to lilfe. Cook's IMDb acting credits are full of shorts and web series including Zach & Dennis: How It All Began, but you may also recognize him from shows like Faking It, Rules of Engagement, Modern Family, and How To Get Away With Murder.

Cook was also one of those fun gold people lead by Elizabeth Debicki in Guardians of the Galaxy Vol. 2 that waged war remotely, as though it was a video game. Some of his upcoming work includes the titular role in a film called How Do You Know Chris and a thriller called Eyes Without A Face. He actually played Dorian Grey in an episode of The Librarians, which is kind of full circle, as Dorian is a Sabrina character as well — and one of the first to encounter the Dark Lord in his new form.

As Satan, he's also doing a very fun accent. Is it posh? Is it that weird British accent that they do in Noël Coward plays and seemingly nowhere else? Is it just a little Australian lilt slipping through? It definitely strikes that balance between evil and charming that defines the Dark Lord.

Hopefully we'll get more Lucifer Morningstar when Chilling Adventures returns for Part 3. Sure, he's evil, but he's handsome — devilishly so, even. Dare I make a Hot Dads of Riverdale extended universe joke here? He is Sabrina's father, after all. Plus, every show like this needs a Big Bad, and Madam Satan seems to be on Sabrina's side now.

Sabrina, for her part, wants nothing to do with her real father, and vows to learn more about her mother's side of the family, who we haven't really learned anything about yet. But she'll have to re-confront the Dark Lord at some point — he may be contained for now, but he's not exactly defeated. He's just locked in Nick's body, and as Sabrina makes clear to the "Fright Club," she wants her boyfriend back ASAP, please. That means they'll have to come face-to-face with the Dark Lord, and that likely means we'll be seeing more of Cook as CAOS continues.

More like this
'The Sandman’s Ending Is A Departure From Neil Gaiman’s Comic Book Series
By Kadin Burnett
'Bridgerton’s Jonathan Bailey & Simone Ashley Just Teased A First Look Of “Kanthony” In Season 3
By Grace Wehniainen, Alyssa Lapid and Sam Ramsden
Everything To Know About The Sandman Season 2
By Kadin Burnett
Netflix Just Rebooted A Classic ‘90s High School Drama
By Maxine Harrison
Get Even More From Bustle — Sign Up For The Newsletter