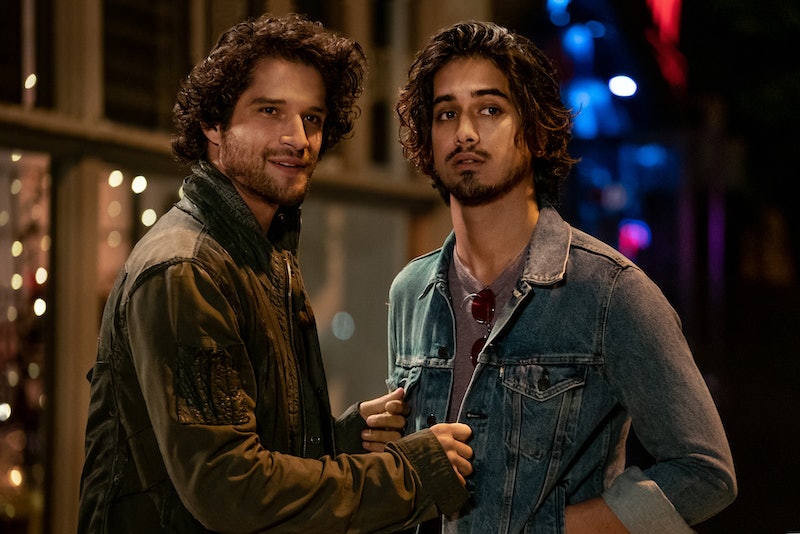 Avan Jogia got catapulted into the spotlight starring in the wholesome Nickelodeon teen series Victorious, but he's running with a slightly more mature crowd these days. Jogia plays Ulysses in Greg Araki's new series Now Apocalypse, which premieres on Starz on Mar. 10. The show is all about sexual exploration and modern millennial relationships at the beginning of the apocalypse, and Jogia's Ulysses is the sexually fluid center of it all. While it might not have seemed like it back in his Victorious days, Joglia's adventurous personality actually makes him the perfect fit for the role.

Talking to Pride about his new role, Joglia admitted that the way Now Apocalypse describes life for twenty-somethings in LA isn't so far off from his own experience. "The first couple years in LA, it's like this," he began. "You're meeting people, you're sleeping with people, you're at some party in the hills, you have no idea what's going on, you're rolling through your own identity."

"I think that's an accurate portrait of anyone in their twenties," he added, "but especially [in] Los Angeles where there's so many big personalities."

Originally from Vancouver, Canada, the 26-year-old actor already had an impressive resume before signing on to Now Apocalypse. He started acting professionally at 14 years old, appearing in the TV movie A Girl Like Me: The Gwen Araujo Story as Danny Araujo. After that, he went on to have multiple smaller roles in TV and some films before landing the part of Beck Oliver on Nickelodeon YA series Victorious between 2010 and 2013.

Following Victorious, he starred as Danny Desal in the ABC Family mystery thriller Twisted, which ran for one season. Next, Jogia managed to break into the world of cinema, appearing in films like The Drowning, Shangri-La Suite, A Midsummer Night's Dream, and Paper Year.

From 2017 to 2018, Jogia starred in Syfy's horror-thriller Ghost Wars. His character, Roman, was a little like Ulysses in that he could see things other people couldn't, and seemed to be a sort of magnet for supernatural happenings. Jogia has already directed his own short film, Of Dogs and Men, and is planning on directing his first full length feature, Door Mouse, sometime this year, per Shoot Online.

In addition to the world of the screen, Jogia is already trying his hand at becoming a recording artist. Back in May, he and his brother Kave released an EP, Do You Love Me, Loretta? on Spotify, which is currently available to stream.

After Now Apocalypse, Jogia's IMDB page lists three other completed projects to look out for in 2019 and beyond.

First up, he has a bit part in Shaft, which hits theaters on June 19. He also appears in The Artist's Wife as a character called Danny. The film is listed on IMDB as being in post-production, although neither a release date nor a character description are given. Finally, Jogia is listed as currently filming Zombieland: Double Tap alongside Emma Stone, Rosario Dawson, Abigail Breslin, and other A-listers. The horror-comedy is slated for a pre-Halloween release on October 11.

With so many other projects on the calendar, fingers crossed Jogia manages to pencil in time for another season of Now Apocalypse, should the series get picked up for Season 2.

More like this
Who Plays Trent In 'Never Have I Ever'? Benjamin Norris Calls His Character A “Himbo Stoner”
By Grace Wehniainen and Radhika Menon
What's New On Netflix: A Third '365 Days' Movie & Lili Reinhart’s New Film
By Arya Roshanian
What’s New On Netflix: 'Never Have I Ever' & 'Indian Matchmaking' Return
By Arya Roshanian
Everything To Know About The HBO Max & Discovery+ Streaming Service Merger
By Brad Witter
Get Even More From Bustle — Sign Up For The Newsletter