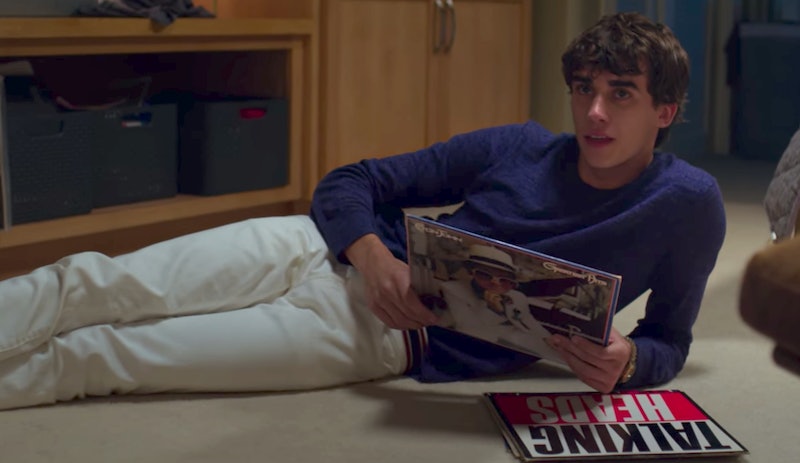 Spoilers ahead for 13 Reasons Why Season 3. In the third season of 13 Reasons Why, Deaken Bluman plays Winston, a new character who reveals another side of Monty. He's introduced in Episode 5 as another student at Bryce's new school, Hillcrest. But ultimately, it's his relationship with Monty, not Bryce, that ends up being significant to the story.

During a flashback in Episode 5, Bryce brings Monty to a Hillcrest party, where Monty runs into Winston in one of the empty bedrooms. Sensing Monty wandered in on purpose, Winston kisses him; Monty initially recoils but then kisses him back. Though a surprising turn of events, this does help to explain Monty's cruelty toward gay people; in actuality, it's a manifestation of his own internalized homophobia. And while having a closeted gay character who is a bully to other gay people is by now a tired trope (Glee has been there, done that), Winston does at least help Monty express this part of himself when they're in private.

Winston appears again in Season 3's final episode, when he confronts Ani for framing Monty for Bryce's murder. He explains that he knows Monty couldn't have done it, because he was with him on the night Bryce died. He seems to be keeping that information to himself now that Monty is dead, but he could stir up trouble in Season 4 if he decides to go to the police and get Bryce's case re-opened.

As for the actor who plays Winston, Bluman only had a handful of credits before landing this role. According to his IMDb page, he's previously been in two shorts and two TV series. Most recently, he was in the show First Love, which streamed on the Blackpills app. He played the older brother of the 12-year-old main character, who he was trying to protect from a 17-year-old who fell for her. You can catch Bluman at around 40 seconds in the trailer above. He's almost unrecognizable with blonde hair, but he still has those signature strong eyebrows.

Bluman was also in the Lifetime digital series Fall Into Me, in which he portrayed a character named Michael for one episode. Outside of his acting credits, there's not much information about Bluman; unlike many young stars, he doesn't even appear to be on social media. But 13 Reasons Why is definitely his biggest role yet, so perhaps that will change soon. In fact, we may see even more of him in Season 4.

Though Winston was only in two episodes, he played an instrumental part in the Season 3 story, and that could continue when the series returns. Winston is clearly good at keeping secrets: even though Monty physically assaulted him, he never told anyone about their relationship until it meant potentially clearing him of a crime he didn't commit. But now that Bryce's case has been closed, will he continue keeping the secret, or will he come forward? His choice could determine the entire arc of Season 4.