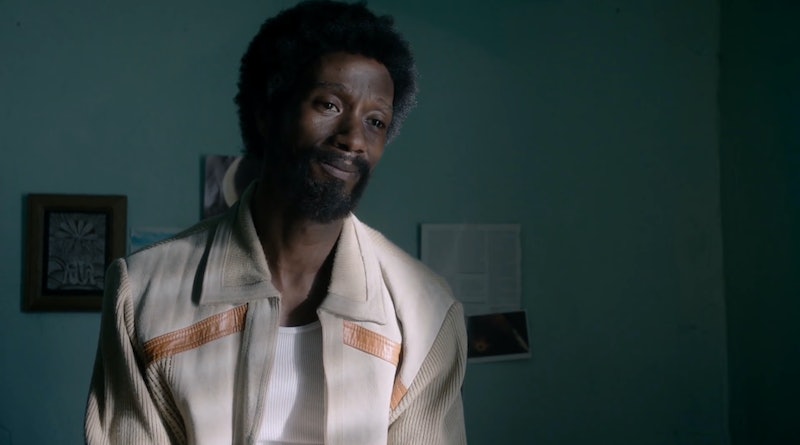 Devoted This Is Us viewers know they need to be prepared to feel a range of emotion on Tuesday nights — they've likely been moved to tears, both happy and sad, by any of the countless emotional arcs the characters have gone through since last season. And, of course, the mystery of Jack's death still endures as one of the biggest storylines in the NBC drama. But Jack isn't the only one who continues to steal the show through flashbacks, even when he's not present in current-day scenes. William, Randall's birth father, quickly captured hearts last season, and, despite the fact that the character lost his battle with cancer, we're lucky enough to continue to learn about him through flashbacks. That's where Jermel Nakia comes in. Nakia, who plays the younger version of William, says he wants to help This Is Us viewers find hope through William's story, even though he treks through some dark territory. In a phone interview with Bustle, the actor says that — especially in Tuesday's episode — he felt a certain kind of responsibility to viewers. Spoilers for the Nov. 7 episode below.

"I couldn’t just do this performance, and [think], 'It’s just a performance,' and then walk away from it," Nakia says. "I feel like it’s very much so a part of the political climate of the African American man right now — with being on trial, and going to jail, and just the conflicts of the African American man in America." William struggles with drug abuse throughout his life, which is also what likely contributed to the death of his girlfriend, and lead to him to leaving Randall at a fire station as a baby. In the most recent episode of This Is Us, however, William finds a glimmer of motivation at what could have been a rock bottom, when a judge grants him a more lenient sentence in hopes that he'll turn his life around.

"In the end, he had one person who believed in him at that moment," Nakia says. "It changed him. He was like, 'OK, I’m not going to do drugs, and every time I [think of the judge's] face, it’ll at least make me think about making a wrong turn or a wrong decision.' And I think, often, that’s life in general. There are a lot of people that don’t have support, and then there’s that one person that comes along and says, 'Hey, you can do this.'"

On the show, William goes through immeasurable grief and loss throughout his life, but before the end, he finds joy. "To see that he actually gets to be a father late in life, and also to be a grandfather, and to be a friend, and basically see everything turn around for him … it went all the way as far to the negative as it possibly could, and then it’s like this beautiful ending of life," Nakia says. "And, he has his son there. I feel like one of the reasons William ever survives even from his youth to his older age was always this thought of somehow being able to reconnect with his son."

This idea of a parent who loses their child in some way is also now being explored in a different way through Randall's foster child, Deja, and Nakia says that William's story has a big influence on how Randall handles the situation. "[Randall] realizes that he could take [Deja's] mother to court, basically saying she’s an unfit mother, and it could mirror something that could’ve happened in his life," Nakia says. "He realizes how horrible it was to not have his birth father throughout his life, and so for him to do it to someone else, he’s unable. ... Yeah, he’s educated, he’s well-to-do, his life is quote-unquote 'perfect' on paper, and her mother’s isn’t. But at the same time, that’s her mother."

Ron Cephas Jones portrays William's older self going through the difficulties of an entirely different age, and Nakia says the way their roles complement each other to tell this story was almost effortless. The two spoke for only a few minutes before Nakia filmed his first scenes as William, and never actively discussed the role or the ways they played the part with each other. "I just kind of usurped his old soul energy that Ron naturally has, and I just kind of went with it," the actor says. "My job at the end of the day is to be him. He’s William, and I need to be his younger. And I just felt like somehow our souls just aligned to make that happen."

The actor thinks that telling these raw and very human stories on a large platform like This Is Us is important — especially for William's character. Nakia even planned to attend a screening of the episode at boys' high school in Chino Hills, California. "Most of these kids have either gotten in trouble with the law to some degree, and are on the trajectory for possibly being behind four walls for the rest of their life, but they’re there in order to try and curb that and change that," he says. "I would love if people would watch the show and say, 'Yeah, that's my uncle, that's my brother, that's my son,' and they also find some way to find hope from it." He continues, "With something like this, where we do have a chronic problem with men in jail, ... or going that direction, [William's journey] is a really powerful, beautiful thing to display on national television."

Nakia doesn't have the screen time that his older counterpart had, and he's not typically in scenes with any of the main cast, but that just makes his impact more impressive. He carries many poignant and moving scenes largely on his own (and often through silence instead of words), and it's clear from a single conversation how important the character is to him. The role is a complex, but ultimately triumphant one, and audiences should take a message of hope away from William's role in the show.

More like this
'Tell Me Lies' Season 2 Is On The Way & The Cast Already Has Ideas For What's Next
By Gretchen Smail and Grace Wehniainen
The First Trailer For 'That '90s Show' Includes So Many Nods To The Original Series
By Jack Irvin, Alyssa Lapid and Grace Wehniainen
Ava DuVernay Thought The 'Queen Sugar' Series Finale Felt “Really Satisfying”
By Brad Witter
It May Be A While Before 'All American' Season 5 Drops On Netflix
By Grace Wehniainen
Get Even More From Bustle — Sign Up For The Newsletter