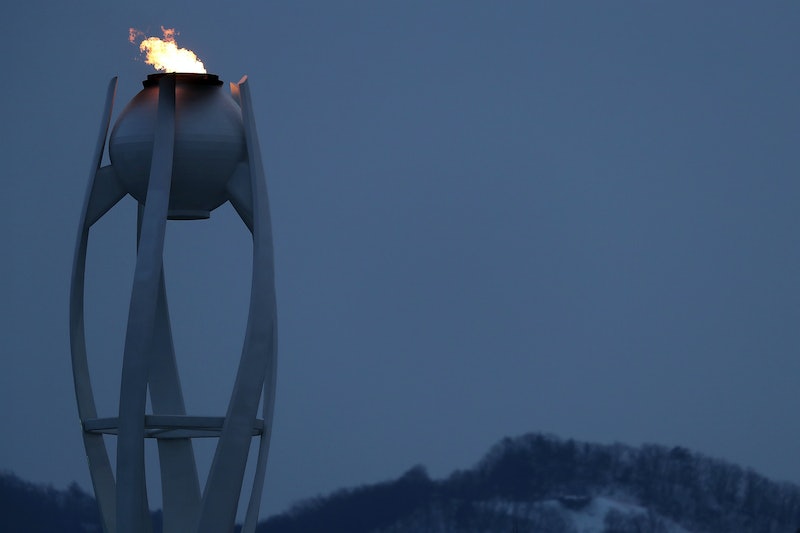 Organizers have not yet revealed how the flame will be extinguished at the end of the Winter Olympics' closing ceremony on Sunday. While there is rarely ever one single person tasked with extinguishing the Olympic flame, the event remains a symbolic and visually striking part of any games' closing ceremony, as well as the Olympic flame's months-long journey around the world.

Months before each Olympic Games, the flame is lit in an elaborate ceremony held in Ancient Olympia, Greece. In the ceremony, an actress decked out as an ancient priestess uses a parabolic mirror to focus the sun's rays and light the Olympic flame, which is then carried to the Olympic host city by thousands of different torchbearers.

Igniting each games' Olympic cauldron from the flame born in Olympia is a symbolic part of the Games' opening ceremony, just as extinguishing it is a key part of the closing ceremony. According to NBC, the 2018 PyeongChang Olympic Cauldron is "the most traditional cauldron setup" seen since the 2008 Beijing Games. With its white orb-like shape, the cauldron in PyeongChang was reportedly designed to resemble a full moon when not lit, according to NPR.

This year, the cauldron was lit near the end of the opening ceremony by former South Korean Olympic figure skater Kim Yuna. It was a special moment for Kim, who not only is a gold medalist and beloved celebrity in her country, but also played a pivotal role in helping PyeongChang land the 2018 Winter Games. But some viewers saw the organizers' method for igniting the cauldron, a robotic arm slowly extended up to it from a mound of ice after Kim touched the Olympic flame to it, as obscene because they thought it had a phallic shape. Some went so far as to dub the device a "fire penis" on Twitter.

But while the Olympic cauldron is traditionally ignited by one or a few honored individuals, it's usually not a person that puts the flame out at all. Rather, the flame is extinguished in some remote way by cutting off the fuel source that keeps the flame lit.

Previous host cities have gotten pretty creative in how they put out the Olympic flame. In 2016, the Olympic flame was extinguished in a mesmerizing spectacle involving manufactured rain and Brazilian singer Mariene de Castro. The flame at the 2014 Sochi Games was "blown out" by one of the Games' bear mascots, as a single tear rolled down its cheek. In 2012, the Olympic cauldron was lowered to the ground and then slowly opened until its flame was extinguished.

Before the Olympic flame can be extinguished in PyeongChang, though, the torch must be symbolically passed on to the next Winter Olympics host city. As part of the Games' closing ceremony, the Greek national Anthem will be played as the Olympic flag is lowered and handed over to a representative of Beijing, which will host the Winter Olympics in 2022. Beijing will then present a short artistic segment in order to get people fired up for the next Winter Games. So without further ado, let the countdown to Beijing 2022 begin!