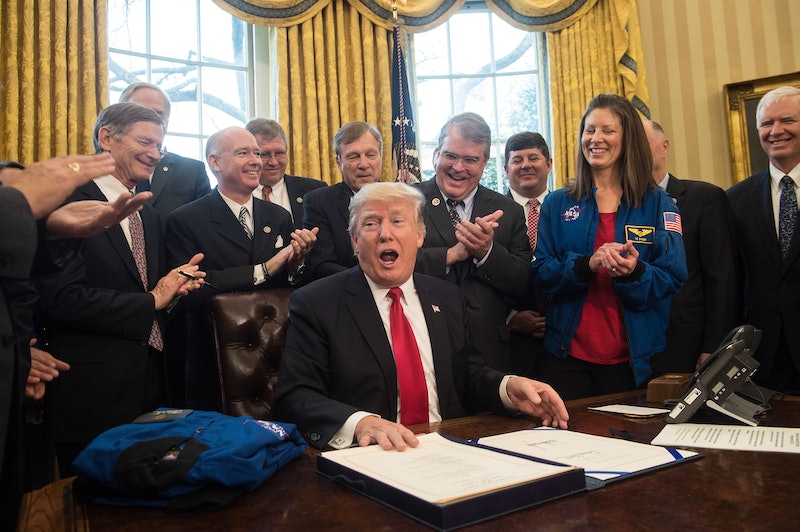 In preparation for Monday's solar eclipse, I, like presumably many other Americans, found my way to NASA's website to learn about the event and how best to safely view it. And while millions of Americans had their (shielded) eyes on the sky, it also provided a reminder that President Trump has yet to appoint a NASA administrator.

There are many providentially appointed positions across many different federal agencies which remain vacant, and NASA administrator and deputy administrator are among them. As of July 4, this is the longest the National Aeronautics and Space Administration has gone without permanent leadership. And while Trump has shown some interest in space exploration and projects — and his daughter Ivanka even viewed the eclipse at the National Air and Space Museum with members of NASA — critics say his comments about his plans for the agency are often inconsistent, and his lack of concern with appointing an administrator or direction for the agency has left NASA in limbo.

The current acting administrator is Robert Lightfoot, whose permanent role at NASA is associate administrator, which is the agency's highest-ranking civil servant position. Lightfoot took over on Jan. 20, the day the former Obama-appointed administrator Charles Bolden retired.

Trump did sign an executive order in late June that reinstated the National Space Council. The group, which is chaired by Vice President Mike Pence, exists to advise the government on future space developments, and to help coordinate between the agencies that are affected by space-related projects. But NASA administrator and deputy administrator are still two glaring absences on the 13-seat committee.

It was reported last week that the White House had decided on whom to name to the administrator position, and that it would reportedly be Republican Congressman Jim Bridenstine of Oklahoma. But these reports have not been confirmed by the administration.

Brindenstine has long been considered a frontrunner to head the agency. The lawmaker has shown a genuine interest in advancing the country's space agenda over his three terms in office. He is interested in seeing the U.S. increase its space travel, and build a permanent station on the moon. But he also wants to help bolster the private sector's involvement in the space industry. He thinks that the government and the private sector shouldn't be competing on some operations, but rather be working together on different areas of expertise to advance space exploration and travel.

While the White House has stalled on many important appointees, today's celestial phenomenon can't help but shine a solar eclipsed light on the vacancies at NASA.