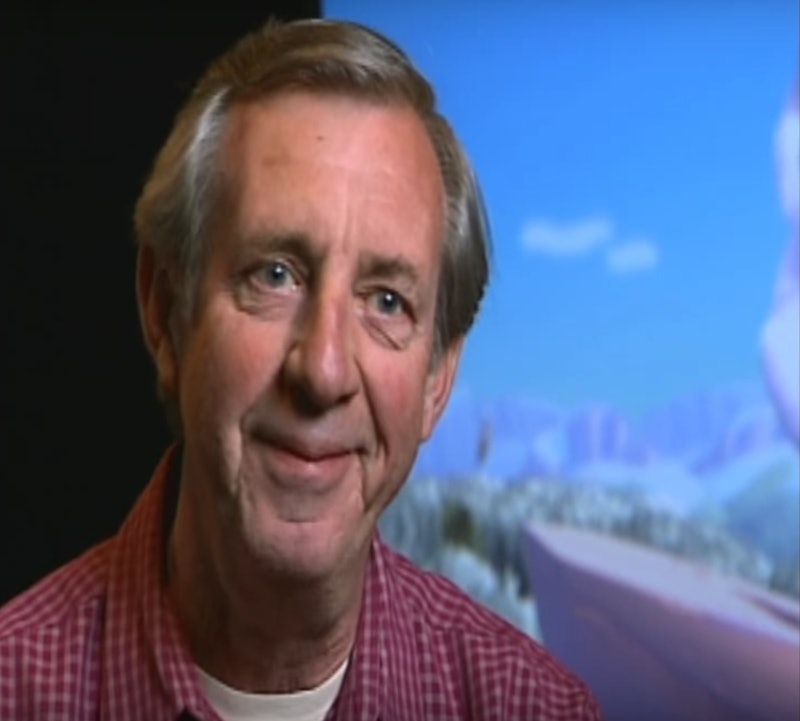 When you go to see Incredibles 2, you might notice that the film includes a mention in its credits of someone involved in the movie's making. But just who was Bud Luckey, the man Incredibles 2 is dedicated to? Luckey, it turns out, had a large role in bringing Pixar films to life, but sadly passed away in early 2018 of natural causes at the age of 83.

It's easy to see why Incredibles 2 is dedicated to Luckey. He was an Academy Award-nominated animator and voice actor who was one of the first people to join Pixar. As The Washington Post notes, he’s even the one to credit with the design for Woody, who is now one of Pixar’s most iconic characters. Besides the Toy Story movies, Luckey also designed characters for A Bug’s Life, Monster’s Inc., Finding Nemo, Cars, Ratatouille, and, of course, The Incredibles.

Luckey's role in The Incredibles expanded beyond designing characters. He also voiced Rick Dicker, the government agent who oversees the Superhero Relocation Program. Due to his death, Luckey was replaced in the sequel with Jonathan Banks, but he did have a chance to reprise his role from the first movie in the 2005 short Jack-Jack Attack.

The Incredibles wasn’t the only film Luckey did voiceover work for, though. He also voiced Chuckles the Clown in Toy Story 3, as well as Eeyore in 2011’s Winnie The Pooh. Luckey received an Academy Award nomination in 2003 for his short film, Boundin’, which was paired in theaters with The Incredibles. The film is about a dancing lamb who feels insecure after being sheered, until a jackalope shows up and instills confidence in him. It's a touching story about embracing life’s challenges and for the film, Luckey did it all: he voiced all the characters, designed them, composed the music, and wrote the story.

Unfortunately, Boundin’ lost the Oscar to the Australian claymation film Harvey Krumpted, but it did snag an Annie Award for Best Animated Short Subject. And to fans' excitement, the film was relived in the Cars DVD extras three years after its initial release, in a new version that has Mater as the jackalope and Lightning McQueen as the lamb. This version doesn’t feature the whole story, but rather just the scene of the jackalope’s motivational speech that helps the lamb feel confident.

From The Incredibles to Boundin', Luckey had quite the career, and it's no wonder that Pixar even decided to include a featurette titled “Who Is Bud Luckey” in The Incredibles DVD. In it, Boundin’ Executive Producer John Lasseter discusses the impact Luckey had on Pixar productions, dubbing him “one of the true unsung heroes of animation” and noting his creation of Woody in Toy Story. Monsters Inc. director Pete Docter also praises Luckey for tackling computer animation after being a hand-drawn animator for years.

But the most touching part of that featurette is hearing Pixar President Ed Catmull express how unique Boundin’ is because it's purely “Bud Luckey’s film. It's Bud Luckey.” Luckey himself is then shown explaining how he came up with the story, saying that because that he’s from Montana, he considered a "newly shaved lamb" to be the most pathetic, sympathetic character he could imagine. Added Luckey, “And then I thought it’s fun to have a mythical character of some sort. On the great plains, it’s a jackalope. I wanted to do a western waltz and I wanted the story to be like your old uncle talking to you or something like that, like an old cowboy.”

Besides his incredible contributions to Pixar, Luckey also worked on productions for other studios over the years. Back in the ‘70s, Luckey was one of the animators for Sesame Street, creating various shorts for the show as well as voicing the animated characters. This includes the award-winning miniseries "Longie and Shorty the Rattlesnakes.”

Luckey’s legacy and extensive contributions to the world of animation will live on and continue to be treasured by Pixar animators for years to come.