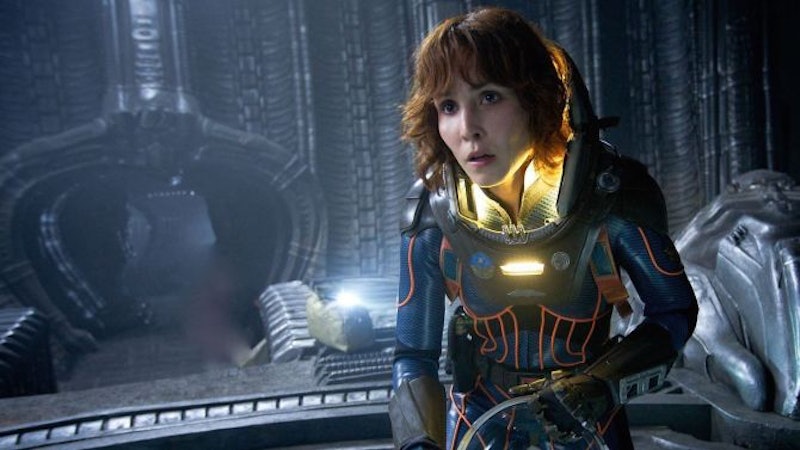 The newest installment in the Alien franchise, Alien: Covenant, appears at first glance to be the first installment in the horror/sci-fi franchise in 20 years. And while that is technically the case, the film actually shares more of a lineage with the pseudo spinoff/prequel Prometheus than it does any Alien movie. So much so that one of the characters from that film, Elizabeth Shaw, seems to come up constantly in Covenant. So just who was Elizabeth Shaw from Prometheus?

Simply put, she was the main character from the film. The franchise has a long history of female protagonists... well, at least a long history of a female protagonist: Sigourney Weaver's Ripley. The badass space explorer led the four previous Alien films, but since Prometheus takes place before Ripley's first encounter with extraterrestrials in Alien, a new lead was needed. Enter Elizabeth Shaw, portrayed by Noomi Rapace. Shaw is an archaeologist who discovers a star map that contains clues about the origins of life on Earth. She joins the Prometheus expedition, who follow the star map and land on a distant moon where they discover the Engineers — the alien race who created humanity — but they're not nearly as benevolent as she'd hoped, as they plan on destroying life on Earth.

Do to the actions by both a living Engineer and alien creatures that are the result of a biological weapon created by the Engineers, everyone on the expedition dies except for Shaw. She alone manages to escape the moon along with the damaged android David, who aids her in flying an Engineer ship. She sets course for the home planet of the Engineers in order to find answers as to why they created human life — and why they now seem to want to destroy it. That's how Prometheus ends, on somewhat of a cliffhanger. But Covenant reveals what happened to Shaw after the credits rolled, and it wasn't good.

Covenant takes place a decade after Prometheus, and the mystery of what happened to Shaw after the Covenant crew intercepts her distress signal — while not the initial reason for their colonial expedition — becomes one of the driving forces of the plot. And while it's not clear exactly what happened to Shaw until well into the film, you can get a pretty good idea by watching the prologue that was released before the movie. In it, Shaw is seen repairing David on board the Engineer ship. She's then put in cryosleep while David promises to wake her when they reach their destination. But once they reach the Engineers' planet, David reveals his true villainous nature and releases the Engineers' biological weapon onto the planet. While Shaw's fate isn't shown here, it's certainly implied that she won't survive.

If it weren't for Elizabeth Shaw's expedition in Prometheus, the mission in Covenant to colonize a planet would have gone a lot differently. It might have even been a success. But the mystery of what happen to this woman isolated in space drove the Covenant crew to an alien encounter they weren't searching for, but one that movie audiences longing for a proper Alien movie should eat up.