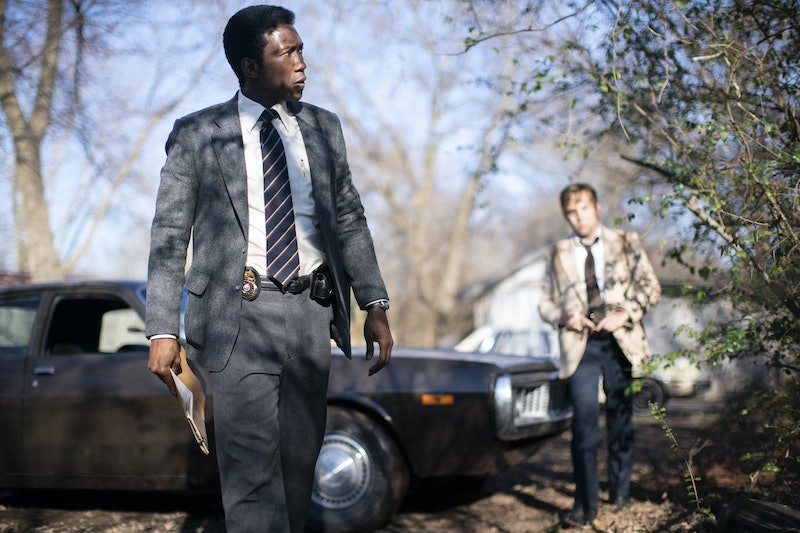 Spoilers ahead for True Detective Season 3, Episode 3 Vehicles have played major roles in the past three seasons on True Detective — from Matthew McConaughey's Season 1 car ride monologues to the motorists who passed the Purcell kids in Season 3 on the day they went missing. And a new pair of suspects emerged in this week's episode — a mysterious couple who were reported to be driving around in an expensive, brown vehicle the day the kids disappeared. Even more suspicious, it appears to be a lead that neither detective followed up on. Whether or not that's really the case, it's still unclear who was in the brown sedan on True Detective and whether they are involved with the Purcell case.

Detective Hays (Mahershala Ali) and his partner, Roland (Stephen Dorff), go speak to a witness who supposedly hadn't been questioned before — although the man says a policeman — or someone who claimed to be — came by. But when the witness describes him, the detectives don't know who's he referring to. Whatever the case, the man explains that he'd seen the Purcell kids a few times before — that they'd pass by his house on their way into the woods.

But that's not all he noticed, describing a black man and white woman who had driven by his house a couple of times in a nice brown car — although not on the same day as the kids. But when the detectives ask whether they can search his property, the witness demands a search warrant. His account seems like a major clue — especially since his house is on the way to the forest where Will Purcell's body was found. But it's unclear, at least at this point, whether or not the men returned to search his property.

While this appears to be a huge piece of the puzzle, Hays and Roland may have missed the vehicle's significance. In 2015, TV journalist Elisa Montgomery (Sarah Gadon) tells Hays, who by this time is suffering from severe memory loss, that there were several people who were never questioned by the police back in 1980. Some of these witnesses noticed "a very nice, brown sedan driving around the neighborhoods," she recounts. "And later, away from Devil's Den on the day of the murder."

Elisa continues, saying, "A witness said police talked to him once, and he told them about the car, but they never came back. And there's no mention of the sedan in the field reports. Another said police never took a statement, but they both noticed the car because it was new and upscale, and that was unusual for the area. And that the vehicle kept driving around." The journalist mentions still another account, saying, "Another former resident, Charles Snider, said two weeks before, he reported that his boy and a friend had told of a black man with a scar in a suit at the cul-de-sac where the kids played near Devil's Den."

If audiences will recall, Devil's Den is the place where teenagers were seen partying and setting off firecrackers back in Episode 1. Speaking of the first episode, it may be helpful to review who we saw driving vehicles the day the Purcell children went missing. While a brown sedan wasn't depicted, the said motorists included those three suspicious teenagers in their purple Volkswagen, Vietnam vet Brett Woodard (Michael Greyeyes) riding his go-kart, and later, Mr. Purcell himself, as he slowly patrolled the neighborhood after dark, presumably looking for his children.

Tom obviously didn't find his kids that night, but he did see Brett, who was still driving around with his go-kart full of trash. With so much stuff packed into the back, it seems likely that two kids could be hidden in there, no problem. Later, we also saw the teenagers playing on two bikes that looked a whole lot like Julie and Will's. How did they get their hands on them, and do they know more than they're letting on?

It's true that all of the cars in their sleepy neighborhood are run down, so it's unlikely that a brand new sedan like the one described would go unnoticed. That said, this descriptor may be a red herring to throw viewers off-track. But that so many witnesses reported the same vehicle does seem notable.

So what does any of this mean? Whoever owned the car was likely wealthy and had just bought their new set of wheels. Furthermore, viewers know that the woman was white and the man was black. Whether or not they were a couple, interracial dating was likely frowned upon in 1980s Arkansas, so they probably would have stood out. Even more significant, the man had a scar. While viewers haven't seen anyone with a memorable scar three episodes in, it may be an important clue to keep in mind. Then there's the fact that he was wearing a suit — much like the ones that Roland and Hays wear.

Finally, since Hays has significant memory gaps by the time 2015 rolls around, what viewers are seeing is likely an incomplete account that will come into focus as the plot unfurls. So whether or not he and Roland ever followed up on the brown sedan lead, True Detective Season 3 is finally picking up speed.

This article was originally published on Jan. 19, 2019