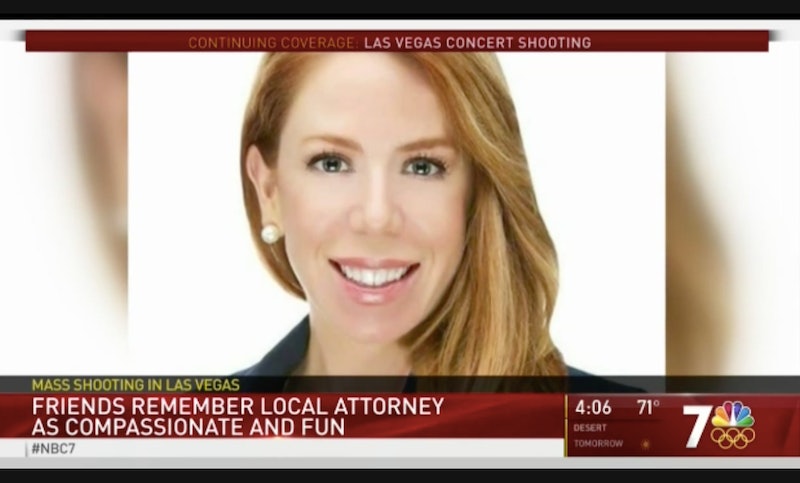 On Sunday, a mass shooting at the Route 91 Harvest Festival in Las Vegas resulted in the deaths of at least 59 people as well as injured hundreds more. One of the victims of the Las Vegas shooting was Jennifer Irvine, a successful San Diego attorney who friends described as a "shining light."

Irvine, 42, had long been affiliated with the San Diego area. As reported by NBC 7 San Diego, she attended the University of San Diego as an undergrad and then graduated from California Western School of Law in San Diego in 2005. She was also admitted to the state bar of California in 2005.

According to her LinkedIn profile, after working in complex civil litigation at the law firm Lerach Coughlin and serving as the manager and owner of the Would Corporation, Irvine opened her own law firm in 2011 — where she specialized in family law and criminal defense. She also had previously served as a legal analyst on the LawNewz Network and The American Dream. Indeed, LawNewz posted a tribute to Irvine on its website on Monday, sharing a clip of her providing legal commentary for the network earlier this year.

In addition to her professional pursuits, Irvine also noted on her LinkedIn profile that she actively participated in a variety of sports. Indeed, Irvine indicated that she was a black belt in Taekwon-do, she practiced hot yoga, and she was an "avid snowboarder."

Friends paid tribute to Irvine via news networks and on social media following the news of her loss. Kyle Krasta, the sports director for CBS News and a long-held friend of Irvine's, posted a moving tribute to her on Facebook on Monday, saying,

My heart is broken. Jennifer Irvine, you are a shining light that will not be extinguished by a gutless coward with a gun. You brought so much joy to others, including me. You left this world singing & dancing, but far too soon. I will never forget you or any of the happy moments we shared. You made this world a better place simply by your presence. So long, my dear friend.

Another friend and colleague, Ashby Sorensen, praised Irvine for her compassion as a person and as a professional, speaking at length with NBC 7 about his friend:

She was a kind, sweet person that cared about others and wanted to help people ... There's a lot of ways to make a lot of money practicing law but there's only certain types of people that go into areas that actually help people and make a difference in their lives and those are the areas she wanted to work ... She was a very smart, good person ... A lot of compassion for her clients. A lot of empathy. She worked really hard. She was very smart and good at what she did ...

Clay Treska also shared a moving Facebook post praising Irvine's advocacy on behalf of cancer patients and expressing his deep sorrow at the news of her loss, saying,

This is absolutely tragic. Jennifer Irvine, a woman whom I have an incredible amount of respect for and one of the most selfless people I have ever known, was gunned down this past weekend in #LasVegas#massacre. As an advocate and supporter, she never asked for anything other than the opportunity to help make a difference and help cancer patients in their fight. She truly was an amazing human being. It is heartbreaking that such a wonderful person was taken away from the world in such a cruel, malicious, and senseless manner. The world has lost an angel ...

It is clear that Irvine very profoundly touched the lives of those she encountered both personally and professionally. Her shining light and the impact she had on the world around her in her 42 years will certainly be truly missed by those who knew and loved her.