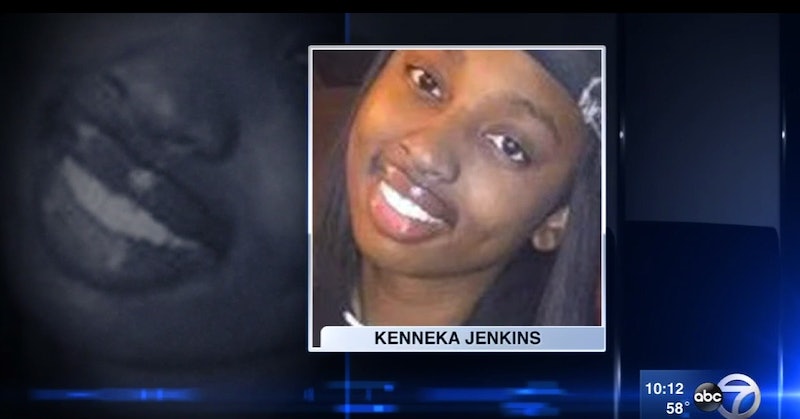 After an hours-long search for a missing teen, the 19-year-old girl was found dead in a hotel's walk-in freezer. Kenneka Jenkins was reportedly attending a party at the Crowne Plaza Hotel in Rosemont, a suburb of Chicago, early Saturday morning. Her body was discovered on Sunday morning in the industrial freezer.

The circumstances surrounding Jenkins' death are still unknown, though Jenkins' mother is at odds with the Rosemont Police Department's current explanation for her daughter's death. Tereasa Martin said police told her that her daughter likely let herself into the freezer while inebriated and died inside. But Martin doesn't think that's plausible. While an autopsy was performed on Sunday, according the the Cook County medical examiner's office it is not yet clear whether foul play is suspected.

The Chicago Tribune reported that, according to Martin and police, Jenkins left her home on the West Side of Chicago at 11:30 p.m. on Friday night, to attend a hotel room party with her friends. Gary Mack, a spokesman for the village of Rosemont, said Jenkins' sister last spoke to her around 1:30 a.m. Saturday. Martin said that she received a call from Jenkins' friends around 4 a.m., saying they could not find her daughter at the hotel.

Martin said she went to the hotel around 5 a.m. to look for her daughter, but she said it was the lack of urgency of hotel staff and police that slowed and obstructed the search for her daughter, and possibly led to her death. Martin said that she was told by hotel staff that she needed an official missing persons report before they could start reviewing surveillance video. When Martin contacted the police, however, she was told to wait a few hours before filing the report.

Later Saturday morning, Jenkins' older sister filed the missing persons report, and police contacted the hotel to begin the investigation into Jenkins' whereabouts. A few hours later, around 3 or 4 p.m., hotel staff told Martin they did not see Jenkins on any security video. It wasn't until 10 p.m. on Saturday that police said they saw Jenkins on the surveillance tape, "staggering drunk" near the hotel's front desk. Jenkins' body was found in the freezer just before 1 a.m on Sunday.

"(I'm) horrified," Martin said to reporters on Sunday. "It's something that no one could ever imagine. It's unbelievable," also adding, "If they had taken me seriously and checked right away, they could have found my daughter much sooner and she might have been alive."

Martin said she had troubling believing the police's suggestion that her daughter stumbled into the freezer while drunk, since the doors on the freezer were heavy, and she wouldn't have been able to easily open them, and would have realized they weren't an entry to a room or elevator. Martin also said that Jenkins' friends' stories about what happened that night "changed over and over." A spokesman for the Village of Rosemont responded to Martin's criticism, saying they he understood it was a difficult time for Martin, but that he had full confidence in the Rosemont police force.

"Anyone can understand how a parent can feel distraught over the loss of a child and feel the need to lash out due to the tremendous pain they're feeling, and we can certainly understand that," Mack said. "But people can rest assured Rosemont is one of the top, highest trained, most respected police departments in the state of Illinois and does a good job at what they do."

Martin had reportedly set up a GoFundMe page to fund further investigation into her daughter's death, though the page seems to be inactive at this time. It's clear that Martin feels the police system failed her daughter, and it seems that she will not rest until she brings "Justice for Kenneka," as her fundraising page was titled.