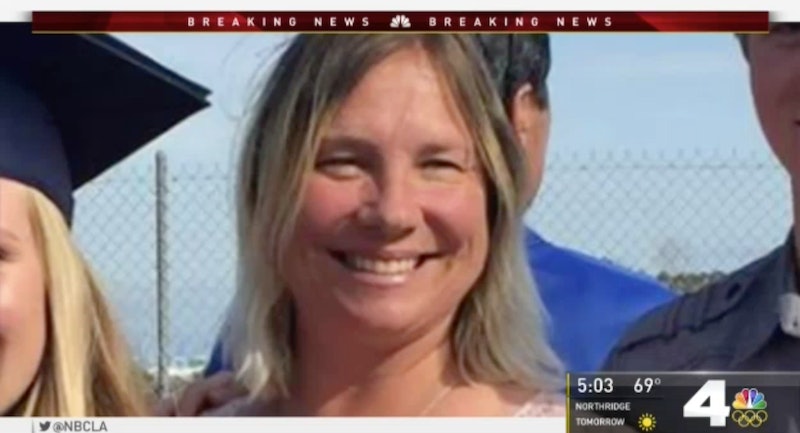 At least 58 people were killed in one of the deadliest mass shootings in U.S. history on Sunday night, when a gunman, Stephen Paddock, opened fire over a country music festival in Las Vegas. Another Las Vegas victim, Lisa Patterson, has been identified. Lisa was a mom of three from Lomita, California, the Las Vegas Review-Journal reported. She was also active in her church, her husband Robert told Fox 5 Vegas on Tuesday, and volunteered in the Palos Verdes Girls Softball League, according to KPBS in Los Angeles.

Lisa's husband, who hadn't slept for two days following the tragedy, told Fox 5 Vegas that he and his wife had been together for more than 30 years, and that they loved coming to Las Vegas.

“We liked the atmosphere of Vegas," he said, "so a lot of times when we took a vacation, it was to Las Vegas." Lisa loved country music, the Daily Breeze reported, and purchased her tickets for Route 91 Harvest music festival six months in advance. She attended the show with four of her friends. About an hour before Paddock opened fire, Lisa called her husband, who was home in Lomita, and held up the phone, so he could hear Big & Rich perform "God Bless America."

“Me and my wife love this country and my wife was just a true American, just through-and-through,” Robert told the Daily Breeze. “I know how much she loved that moment from the concert.” Lisa called him again, just before Jason Aldean took the stage, and told him "how great the weather was and how much of a great time she was having," he said.

Once Robert didn't hear from his wife the following day, he knew something was wrong. “There never was a time in 27 years where I didn’t know where my wife was," he told the Daily Breeze.

At the time of his interview with Fox 5 Vegas on Tuesday, Lisa's eight-year-old daughter, Brooke, still hadn't heard the news of her mom's passing. "I want to be the one to tell her," he said, "and when I left, I couldn't say anything to her, because I just didn't know what was going on."

Lisa's two oldest children, 16-year-old Robert and 19-year-old Amber, are grappling with the loss of their mother. "They're basket cases right now," Robert said. "Just like me." A GoFundMe campaign has been set up to collect donations for the family. As of Wednesday night, it's raised more than $65,000. After paying funeral expenses, the money will be used to fund the Patterson children’s tuition, according to the Daily Breeze.

According to GoFundMe, created by a family friend, Andy Tamilin, Lisa and her husband both volunteered for the softball league and spent "endless hours donating their time and energy to help the girls of our community."

A friend of Robert, Dennis Kim, told the Review-Journal that Lisa and Robert had a "picture-perfect family," adding that Lisa "brightened" Robert's life. “They both are just the perfect parents that anybody can ask for,” he said. Together they owned a hardwood flooring business, according to Kim. “Bob is very well known, they both are, for their craftsmanship and quality of work — which is going to really kind of suffer now, because Lisa won’t be there to handle all the administrative bookkeeping."

“Lisa had an infectious energy and fierce love for her family, and we are beyond heartbroken for Bob and their three kids,” Tamilin wrote on the GoFundMe page. "Any small amount helps during this difficult time, let's give back to Bob and [the] family as they have given so much to us. 100 percent of funds collected will be given directly to her husband."

While Lisa's sister confirmed her death to the Review-Journal, she declined to share any more details without consulting the family. Robert told the Daily Breeze the funeral services will likely be held Oct. 13 at St. John Fisher Church in Rancho Palos Verdes, California.

“My wife loved life. We lived incredibly happy. She was 100 percent dedicated to her kids. That was pretty much what her life revolved around," Robert told the Daily Breeze. “I’m just happy for the time I got to spend with her."