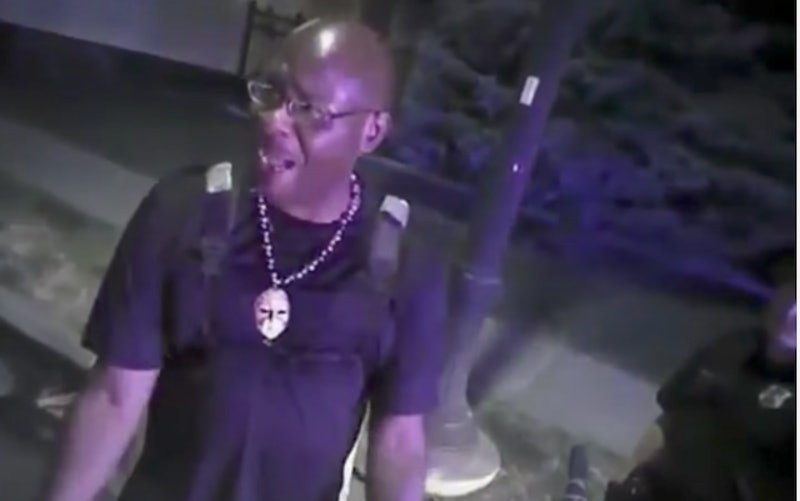 Patrick Harmon was riding his bicycle without a red reflecting taillight when he was pulled over in Salt Lake City on Aug. 13. That traffic infraction would eventually led to Harmon's death, as recently released video footage from a police bodycam shows the 50-year-old being shot in the back by police at point-blank range.

Before the situation escalated, Harmon seemed "emotional and distraught" while speaking with police, according to testimony provided by police officer Clinton Fox. He had two outstanding warrants for his arrest, and appears to plead with police in the video, saying that he does not want to go back to jail.

Then Harmon tried to run away. The police footage shows him fleeing in the opposite direction from the officers. One of them tried to shoot Harmon with his taser, but Fox pulled his gun and fired three times at Harmon, who fell immediately to the ground.

While he was face down on the concrete groaning, Harmon was handcuffed. The officers did attempt to provide first aid to him, but Harmon would pass away shortly thereafter.

There have been no charges filed in this case, as prosecutors argued that Fox was acting out of fear for his life and well-being, and that of the officers with him. It's a common defense the police employ, one that is well-known to those on all sides involved in the debate over police brutality in America.

Fox's claim that he felt imperiled by Harmon is not clearly evidenced by the police footage. Harmon seems disoriented and upset, and when he flees there is no obvious indication that he was trying to threaten the police.

Fox's defense has been further called into question due to his own words documented in the video. "I'll f--king shoot you!" he yells at Harmon before almost immediately firing three times at a man running away from him.

Salt Lake City has implemented a de-escalation training program for its police force that has earned widespread praise. The goal is to help officers develop skills that allow them to tamp down excess force rather than ratchet up high stress situations. They've given out awards to officers who put these de-escalation techniques into practice. For instance, one officer actually backed up as a suspect threatened him with a knife, then used his police car as cover to regroup, and ended up choosing to tase the suspect rather than fatally shoot him.

Until May 2017, the Salt Lake City police force had gone 20 months without a fatal shooting.

But those lauded de-escalation practices don't register in the police footage. Lex Scott, a Black Lives Matter organizer in the city, told The Guardian, "That officer disregarded his de-escalation training. It's just brutal. How could anyone with eyes and ears believe that that officer was justified?”

Harmon's family agrees. "They just murdered him flat out," said niece Alicia Shaw. “They are lying. There is no way they were threatened by anything. He was only trying to get away.”

While Harmon was questioned, he told officers they may find a warrant for him. And the officers did discover Harmon had been convicted of aggravated assault, a second-degree felony. That was followed by a second $10,000 felony warrant for Harmon after he did not show up for sentencing.

Fox also testified that he had seen a knife in Harmon's possession. “Fox said that in ten years of law enforcement and two military deployments, it was the scariest situation he had ever been in,” stated a report by investigators.

Still, the video footage will likely strike many as evidence of unnecessary force used against a fleeing suspect.