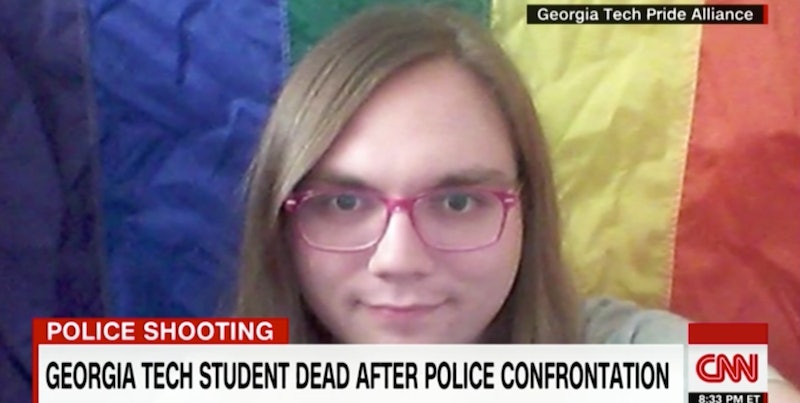 According to the Georgia Bureau of Investigation (GBI), LGBTQ pride leader and Georgia Tech student Scout Schultz was reportedly shot and killed by a campus police officer on Sunday. At this moment, the bureau is conducting an independent investigation of the late night event and surrounding circumstances to determine the nature of Schultz's death. According to a statement provided to BuzzFeed, the bureau was notified of a death on Sunday involving an engineering student in the institution's West Campus residential community.

So far, little is known about Schultz. The bureau noted that they were a fourth year engineering student, and emerging media reports indicated that Schultz was also the president of the Pride Alliance on campus. According to the GBI, they were originally from Lilburn, Georgia.

According to the Georgia Tech police department, authorities received a call on late Saturday night indicating a "person with a knife and a gun" in the area. According to the GTPD, Schultz was reportedly "armed with a knife" and "advanced on the officers" with the object in their hand. The incident unraveled close to a Georgia Tech dormitory where Schultz "would not comply with the officers' commands," according to the bureau. Per the press release from local officials, Schultz reportedly walked toward to the officers armed with a knife. The statement reported that an officer allegedly shot at Schultz after that.

Schultz was reportedly taken to Grady Memorial hospital where they passed away presumably due to the gunshot wound. A video of Schultz apparently walking toward an officer has been made public. BuzzFeed shared it in its report on Schultz and it contains visual content that could be disturbing to some viewers. Video footage of the post-shooting scene provided by CNN affiliate WSB showed a small and metallic flip-open utility tool lying on the ground.

Schultz's Pride Alliance network shared its thoughts on the incident and described them in heartwarming and kind words. The 21-year-old student was remembered as the "driving force behind Pride Alliance for the past two years" who had "pushed us to do more events and a larger variety [of] events."

According to the Alliance, Schultz was a hardworking and dedicated student who "reminded us to think critically about the intersection of identities and how a multitude of factors play into one's experience" on campus. Georgia Tech's Progressive Student Alliance described Schultz as an "incredible, inspiring member of our community and a constant fighter for human rights" and invited students to celebrate the memory of the youth leader.

On Sunday afternoon, local students from the campus left flowers and memorials in the spot where they had been reportedly shot and killed. A vigil has been planned in their memory as well. The school has offered counseling at the Georgia Crisis and Access Line for students who may have been affected by the shooting.

Schultz's parents have written about their death as well. In a Facebook post, Schultz's father, William Schultz wrote that they "had a tiny knife. They didn't have to shoot [them] in the heart, but that's what they did. Antifa activists beware!" Bustle has reached out to the Georgia Tech Police Department for comment on Schultz's father's comments and will update the report once GTPD files a response.

Members from the institution offered their sympathy for those affected by Schultz's death. In an NBC News report, John Stein, dean of students and vice president of student life, offered his condolences and said that Schultz's "sudden and tragic death has been devastating news for the Schultz family, classmates, and for members of the community who knew Scout personally, the shock and grief as particularly acute."

More like this
What Is Happening With Sheku Bayoh’s Case?
By Sophie McEvoy
The Most Powerful Photos From The Weekend’s Abortion Rights Protests
By Melanie Mignucci
Yinka Bokinni Recalls Terrifying Truth At Heart Of 'How To Hire A Hitman'
By Frances Stewart
Every Single Big & Small Way You Can Fight For Abortion Rights
By Tess Garcia
Get Even More From Bustle — Sign Up For The Newsletter