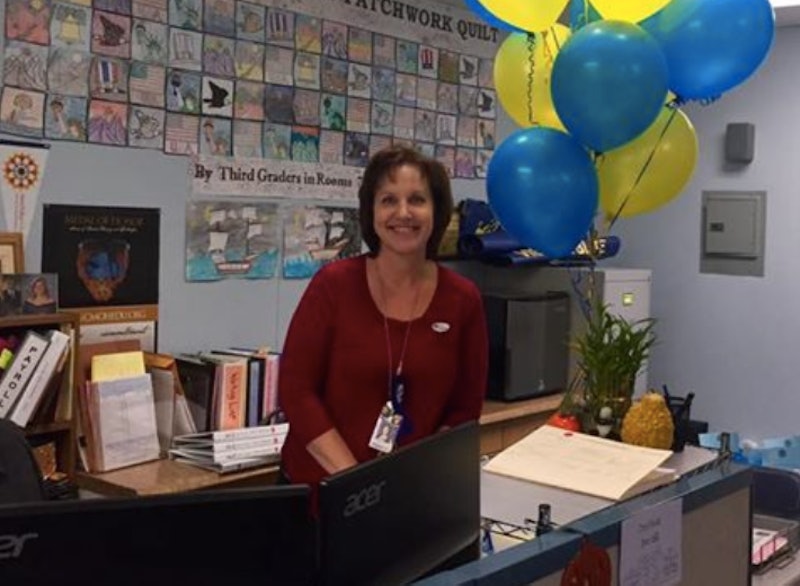 A California resident and public school employee, Susan Smith, was one of the 59 people who died in the Las Vegas shooting Sunday night. Smith, 53, had been an office manager at Vista Elementary School in Ventura County for the past three years. She had worked for the Simi Valley Unified School District since 2001.

The Simi Valley Acorn reported that in an email sent out Monday, principal Julie Ellis wrote:

Today our Vista family is grieving a huge loss. Susan was a wonderful person, kind, loving, patient with our students, efficient, and she had a wonderful sense of humor. We are all devastated by her tragic passing.

Jake Finch, district spokesperson, described Smith as the heart of the school and told the Simi Valley Acorn that in a close-knit community, she touched a lot of lives. Smith and two of her friends, fellow Simi Valley district employees, were among the 22,000 attendees at the Route 91 Harvest Festival where country singer Jason Aldean was performing. The concert was cut short when a gunman went on a killing spree, spraying festival-goers with rapid-fire bullets from the 32nd floor of the Mandalay Bay Resort and Casino. Smith was among the 59 people killed, and an estimated 527 more who were injured. Smith's companions escaped uninjured.

After learning of the tragedy overnight, school district officials informed staff on Monday morning. They also organized a crisis team of counselors and teachers to offer support at Vista Elementary, where parents and employees were mourning. Counselors went to every classroom and broke the news to the students in an age-appropriate manner. Smith was a country music fan and an active participant in the Parent-Teacher Association. She is survived by two children and her husband.

Some classes made sympathy cards or other artwork for Smith's family. Parents and firefighters from nearby Station No. 42 offered bouquets of flowers and condolences. Simi Valley is a small community where people know each other deeply for a long time, county firefighter and spokesperson Capt. Stan Ziegler told the Ventura County Star. Some crew members have children who attended the school and knew Smith.

"She always had a smile on her face and... the kids loved her as well as all the staff and families," said Vista parent Charlene Tamparong, who had known Smith for three years, to the Simi Valley Acorn. Smith's friend Kathy Hinkle also told the paper that she felt numb after hearing about the loss. "She touched so many lives, whether it was through the schools, through the dance community at Gotta Dance, and just life in general," Hinkle said. "Her eternal smile is what I will remember most. Our community has lost a beautiful soul."

The mass shooting in Las Vegas was one of the deadliest shootings in modern U.S. history. The death toll has surpassed the 49 killed at Pulse nightclub in Orlando, Florida in June 2016. There have been more than 200 mass shootings in 2017 so far, defined as incidents where four or more people excluding the shooter have been shot.

Police have identified 64-year-old Stephen Paddock, a Mesquite, Nevada, resident, as the Las Vegas shooting suspect. Paddock committed suicide before police broke into his hotel room and found his body plus 23 weapons. Investigators later found in his Mesquite home 19 firearms, explosives, and thousands of rounds of ammunition. Terrorist group ISIS has taken responsibility for the attack and given Paddock a jihadi name, but the FBI said it found no link between the Las Vegas shooting and any terrorist organization. Paddock's brother has also told news outlets that Paddock showed no indications of political or religious extremism.

The Los Angeles Times has added Smith's picture to their "Portraits of the fallen" for Las Vegas shooting victims. Smith was usually the first person Vista Elementary students would see when they walked into the school. “She was great with the children, patient and kind," school spokesperson Finch said. "Her loss is huge to us."