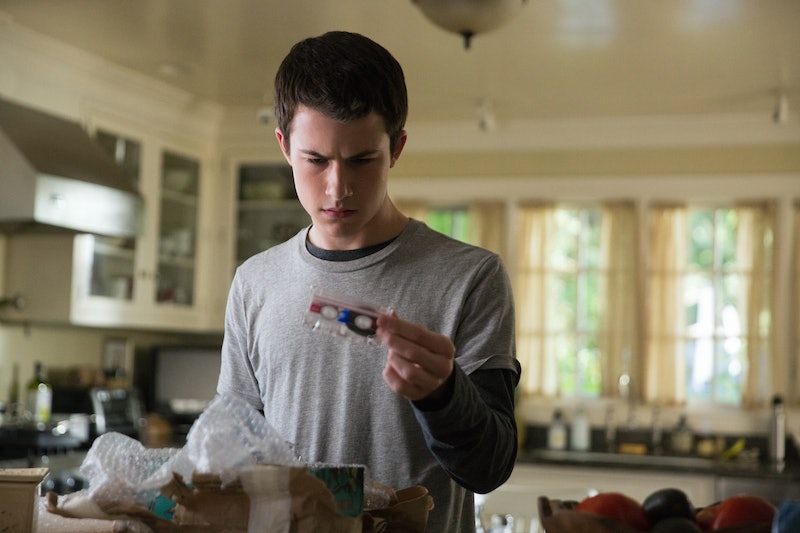 In the first season of 13 Reasons Why, two weeks after Hannah Baker's death, a box of 13 cassette tapes was left on her good friend and coworker, Clay Jensen's porch. Not only did each tape chronicle one of the 13 reasons why Hannah committed suicide, they also revealed an abundance of powerful information about the lives of many students at Liberty High. Tape 9 on 13 Reasons Why outlines the story of a girl who is burying a painful secret, one that she refuses to admit to herself as the truth for a long time. Although viewers can see who Hannah's narration is referring to through flashbacks on the show, when the tapes land in the hands of Hannah's parents at the end of Season 1, it became clear that not everyone who listened would know which girl Tape 9 was about on 13 Reasons Why.

Tape 9 is actually addressed to Justin Foley, who was also the subject of Tape 1, and Hannah's first kiss. He was the one who contributed to the beginning of the downward spiral that led to Hannah committing suicide. Justin spread vulgar rumors and shared an explicit photo of Hannah, which led to a lot of slut-shaming attention placed on Hannah at school.

In her first tape to Justin, Hannah shared her own story. In Tape 9, she shared someone else's — the "girl" she referred to on the tape was her former best friend and Justin's girlfriend, Jessica.

“You’d been with the same girl all night,” Hannah said to Justin on the tape. "But I’m not going to call her out by name, even though, if you were at that party, you already know." Hannah was referring to the back-to-school party Jessica threw at her house to kick off their junior year of high school. She and Justin had gotten together over the summer at summer school, and by the time of the party, her close friendship with Hannah had fallen out. Hannah was hesitant to go to the party at first, because she had made a promise to herself to change her ways and embrace a fresh start. But while scraping gum together at their movie theater job, where they both worked, Clay practically begged her to go, so Hannah decided to make an appearance.

"If I had known what would happen," Hannah said on the tape. "What that night had in store, I might never have walked through that door." She proceeded to outline a tumultuous turn of events that she found herself in the middle of. She eventually found herself drunk and making out with Clay in Jessica's room. Regretting her decision to go to the party at all, she freaked out and told Clay to leave. He did, but before she could also leave the room, Justin and Jessica stumbled through the door. Not knowing what else to do, she hid in the closet.

"Don't you wanna mess around a little?" Hannah heard Justin say. Jessica was obviously too intoxicated to consent to anything, and she ended up passing out on her bed. Justin then left the room momentarily, and, from inside the closet, Hannah heard him bickering with Bryce. "I bet you had some fun with her, didn't you?" Bryce asked Justin in the hallway. "Let me see." Justin tried to drunkenly withhold Bryce from entering the room, but Bryce shoved him to the side, went in, and locked the door.

Hannah then overheard Jessica being raped. “That girl had two chances that night," Hannah said on the tape to Justin. "But we both let her down. How do I live with that?"

After Hannah's death, Jessica struggled to come to terms with what actually happened the night of her party — especially since Justin was pretending nothing happened, either. Eventually, by the season's end, when everything comes to a head and the tapes are turned over to the school as evidence for the lawsuit between the district and Hannah's parents, Jessica admitted to her father that she was raped. But if the lawyers, parents, and school faculty weren't at Jessica's house the night of the party, they would never know who Tape 9 is about — making it a mystery to the adults that Season 2 needs to solve.

More like this
Who Plays Trent In 'Never Have I Ever'? Benjamin Norris Calls His Character A “Himbo Stoner”
By Grace Wehniainen and Radhika Menon
Does 'Locke & Key’s Ending Mean There Could Be A Season 4?
By Sophia Moore
'The Capture' Is Finally Back – & S2 Looks Tense AF
By Sophie McEvoy and El Hunt
A 'Lord Of The Rings' Star "Will Challenge Misty" In 'Yellowjackets' Season 2
By Gretchen Smail
Get Even More From Bustle — Sign Up For The Newsletter