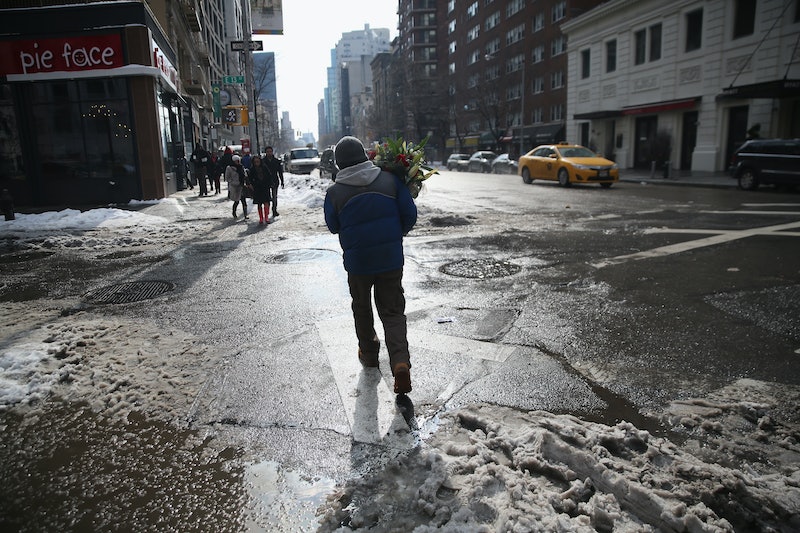 It only takes a quick perusal of Timothy Caughman's Twitter feed to know that he seemed exceedingly good-natured. Several of his most recent posts are about the death of the legendary Chuck Berry. Much of Caughman's interest overall on Twitter surrounded movies, music, modeling — his retweets were often of pop culture happenings, which is fitting for a man who cherished the occasional celebrity run-in afforded to watchful New Yorkers. Caughman's profile picture features him with his arm tucked around Beyoncé. It all makes the news of his murder more surreal, and the tragedy more visceral, this small but poignant glimpse into his personality.

Caughman described himself in his Twitter bio this way: "can and bottle recycler, autograph collecter in new york city and i would love to visit california. Im a good businessman." Caughman did indeed have a passion for recycling, making his living off of recycling bottles. His neighbor, Jean-Paul Chatham, told New York Daily News, "The man don't do anything to anyone, just collecting his cans to make his little money." And his pictures with celebrities are extensive, with photos featuring everyone from Oprah Winfrey to Wyclef Jean. Caughlin also clearly liked Shari Headley, as he tagged her in many of his posts.

Tragically, Caughman did not survive a brutal knife attack that occurred late Monday night. A 28-year-old man from Baltimore went to New York City with the alleged intention to target "black men," telling police that he hated them. After video surveillance clued the police into who to look for, the man turned himself in, admitting that he was responsible for the injury and subsequent death of Caughman. The NYPD has announced they are considering this a hate crime.

After being stabbed in the chest and back, Caughman managed to walk over a block to the Midtown South Precinct, collapsing after his arrival. An ambulance took him to a nearby hospital, but his wounds were too grave. Caughman was pronounced dead by Bellevue Hospital.

Outside of his Twitter feed, there is not much information available on Caughman, as of now. What can be inferred paints a picture of a man whose unabashed love of celebrities brought him great joy on the streets of New York. But that was by no means the only thing Caughman cared about. In fact, almost all of his tweets are relentlessly positive, complimenting celebrities, sharing tips for good reading, for health, for celebration.

It's deeply humbling to read through Caughman's Twitter account, so unusual in these times of call-out culture and rampant trolling. There is a buoyancy here, a sense of a lively and hopeful spirit. What happened to Caughman was a tragedy, but his life will be remembered as one that seemed so bright.

More like this
25 Things I've Reduced My Life To, In Addition To WFH In My PJs
By Ginny Hogan
7 Things We Learned From Rebekah Vardy's First Post-WAGatha Christie Interview
By Sam Ramsden
Jennifer Coolidge Needs 'Legally Blonde 3' To Happen So She Stops Getting Hot Dog Jokes
By Jake Viswanath
Courteney Cox Doesn't Remember Filming 'Friends'
By Jordyn Tilchen and Sam Ramsden
Get Even More From Bustle — Sign Up For The Newsletter