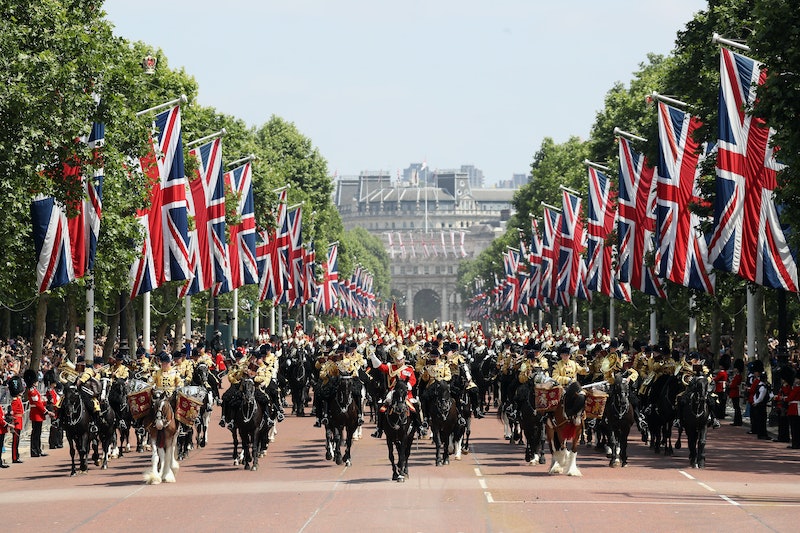 The world may currently have its eyes on the UK thanks to U.S. President Donald Trump's first official state visit, but let's not forget that the first week of June also marks another important event in the royal family's calendar — Trooping the Colour. While the official ceremony won't be taking place until this Saturday (June 8), it's hard not to wonder who will attend Trooping the Colour 2019 — especially if you want to take your mind off the commotion surrounding Trump's visit.

Trooping the Colour is an annual ceremony that features a parade of more than 1,400 soldiers, 200 horses, and 400 musicians, and marks the sovereign's official birthday, per the Daily Express. (It takes place in June, while Queen Elizabeth's birthday is on April 21.) With that taken into account, the queen will undoubtedly be in attendance to oversee and enjoy the festivities.

While there isn't a confirmed list of royal attendees, it seems like the guest list will be similar to 2018's Trooping of the Colour, with the addition of Prince Louis, according to the Mail on Sunday (via the Express). As detailed by Town & Country magazine last year, there were a total of 45 members of the royal family at the ceremony, including Prince Edward, Princess Anne, Princess Beatrice, Princess Eugenie, Prince Andrew, the Duke and Duchess of Cornwall, the Duke and Duchess of Sussex, and the Duke and Duchess of Cambridge with their children Prince George and Princess Charlotte. It is also believed that Prince Louis will be in attendance, making this his first appearance at Trooping the Colour.

It's expected that Prince Philip will not attend seeing as he retired from public engagements in 2017 (and didn't participate in last year's ceremony), but there's also uncertainty surrounding an appearance by Meghan Markle, seeing as she's on maternity leave following the birth of Archie Harrison Mountbatten-Windsor on May 6.

Even though Meghan is not participating in Trump's state visit due to her maternity leave, there is the possibility that she will make an appearance at Trooping of the Colour if you take the Duchess of Cambridge's attendance last year into account. She appeared at the event in spite of being on maternity leave after the April 23, 2018 birth of Prince Louis, as Harper's Bazaar reports. The magazine also notes that Meghan may join Prince Harry, but we probably won't be seeing baby Archie at the ceremony.

If you were hoping to get front-seat action of the event, sadly the ballot for seated tickets closed on March 1, and the standing tickets have already sold out, according to the British Army's official site. Although, you can watch members of the royal family make their way to the palace "along the Mall or from the edge of St. James's Park," according to travel blog Roaming Required. You'll have to get there on Friday or early Saturday to get a prime spot.