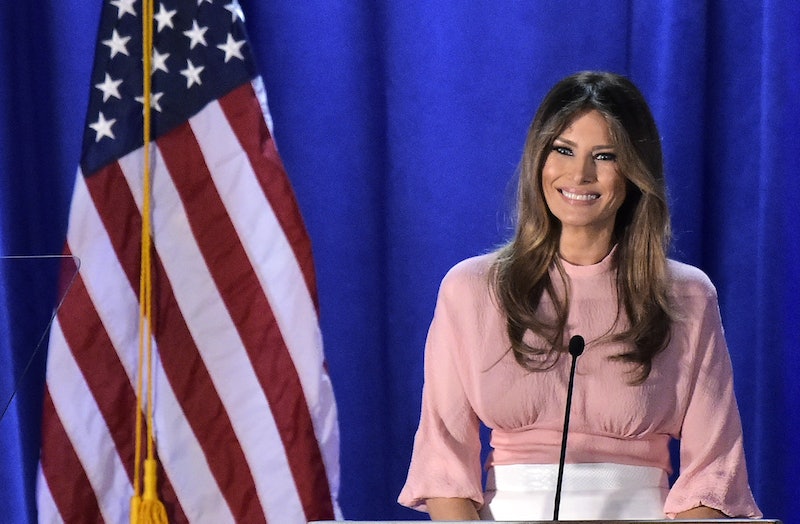 The presidential inauguration is on Jan. 20, and there has been plenty of talk about who will (or won't) dress Melania Trump, the future first lady. Some designers have already openly refused to dress her, but there are reportedly two designers in talks with Trump. UPDATE: A spokeswoman for Trump has confirmed to WWD that Ralph Lauren is dressing the incoming FLOTUS for inauguration weekend, saying, "With the historic swearing-in of her husband, Donald J. Trump, as the 45th President of the United States, the First Lady-elect will become America’s new First Lady wearing an American designer who transformed American fashion, Ralph Lauren."

According to WWD, Ralph Lauren and Karl Lagerfeld may be dressing Trump for the inaugural events. Huffington Post reports that Trump has worn Lauren twice during the presidential campaign, so it wouldn't be that much of a stretch for him to consider dressing her for the Inauguration. The designer has worked with other First Ladies, dating back to Betty Ford, and up to the current FLOTUS, Michelle Obama, according to WWD, and also dressed Hillary Clinton throughout much of the presidential campaign. Bustle has reached out to Lagerfeld and Lauren for comment.

As far as Lagerfeld is concerned, WWD reports that, "as recently as eight years ago, it would have been considered more high crime than misdemeanor for a first lady to step out in non-American clothes at any time, let alone at the inauguration," however Obama paved the way for this to be a more common occurrence. Lagerfeld is the head of Chanel and Fendi, as well as his own label, so Trump could wear any one of these houses should the rumors about the designer dressing her be true.

This white jumpsuit is one of the looks reportedly designed by Lauren, according to WWD.

The black number she wore to the third presidential debate was also from the Ralph Lauren label, according to Teen Vogue.

The pantsuit Clinton wore to give her concession speech was reportedly designed by Lauren, also.

Clinton was known to wear the designer all throughout her presidential campaign, indicating that Lauren may not choose who to dress based on his political beliefs.

According to E! News, the black gown Obama wore while in England was designed by Lauren.

Neither Lauren or Lagerfeld have confirmed or denied these rumors, according to WWD, so we may all be left in suspense until Friday.