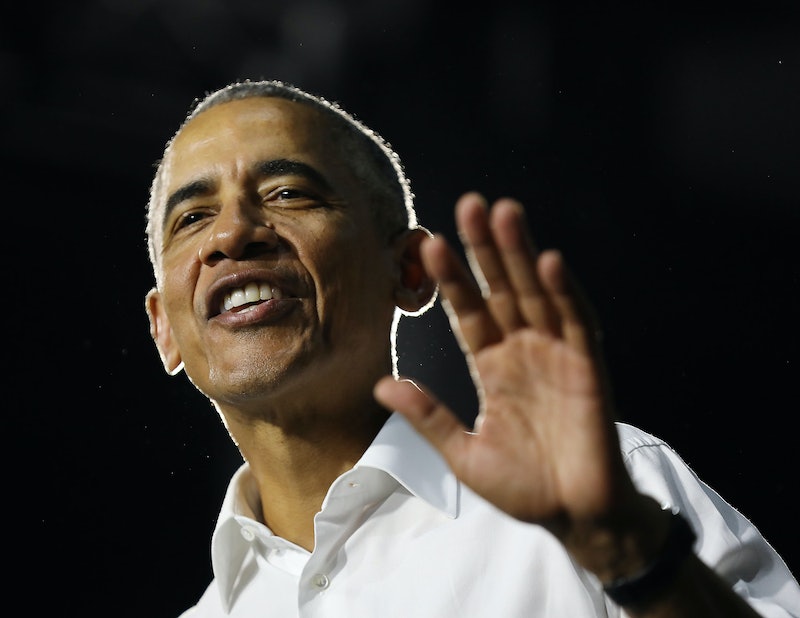 Former President Barack Obama has stayed mum on his thoughts about the 2020 Democratic contenders for the presidency that have announced their candidacies so far, and a new report in The New York Times suggested that won't change. Who Obama will support in 2020 is likely to be decided only after the Democratic primary — not before, many friends and insiders told The Times.

The one exception, reportedly, could be if the primary race came down to two or so candidates, and he believed only one had a chance of beating President Donald Trump. "I am sure he feels, as an American, that he wants to make sure the Democratic Party puts up the best possible candidate," Steve Westly, a California investor and Obama fundraiser told the paper.

Far more likely, though, is that he'll stay out of it. Key Obama strategist David Axelrod confirmed to The Times that he told a group of 2020 hopefuls in early February that Obama would not endorse. "They asked me about Obama endorsing. I said, ‘I don’t imagine he will,'" Axelrod told The Times. He clarified that was just his opinion, not an official position.

But according to the report, it might as well as be. The paper reported that friends and colleagues of both the former president and first lady Michelle have said they will keep their preferences to themselves. Obama has, though, met with some of the contenders privately to share his experience and counsel.

The Times report is not the first time this has been discussed. CNBC ran a report in January suggesting that Obama wouldn't decide until the primary process is at least further along. But, the report suggested that Obama would be mostly likely to support Sen. Kamala Harris or former Vice President Joe Biden.

Biden served as Obama's vice president for eight years, making clear the reasoning. "Obama has a lot of loyalty to Biden, they are very close," Robert Shrum, director of USC's Dornsife's Center for the Political Future, told CNBC. "Obama could obviously have a very large impact on this process if he wanted to, but I don't know whether he will."

As for Harris, Obama reportedly considers her a loyal ally, too. She endorsed Obama in 2007 when she was San Francisco district attorney — long before most changed their votes from Hillary Clinton to Obama in that tight nomination battle.

Until later on in the process, all reports suggest that Obama will focus on the individual meetings. Senior adviser Eric Schultz told The Times Obama is "happy to speak privately with candidates seeking his guidance on the best way to lead the country."

As for the meetings, Schultz said, "President Obama counsels candidates to always show up and make their case even in areas or in front of audiences they may not necessarily win; express views and positions that reflect their genuine beliefs; and share a positive vision for the country true to their own personal story."

The candidates, though, might ultimately want more than that, as the Los Angeles Times reports of candidates name dropping Obama in interviews. This may be an attempt to position themselves as a logical heir to Obama, even if they don't have his explicit endorsement at that moment.

One thing is clear, Obama will ultimately endorse whoever does win the Democratic nomination.

More like this
Are John Legend & Kanye West Still Friends? The Singer’s Latest Update Is Candid
By Brad Witter
Rishi Sunak's Wife Is Worth More Than The Queen
By El Hunt
Khloé Kardashian Is Reportedly Dating A Private Equity Investor She Met Through Kim
By Jordyn Tilchen
Christina Aguilera Took A Powerful Stand At Brighton Pride
By Sam Ramsden
Get Even More From Bustle — Sign Up For The Newsletter