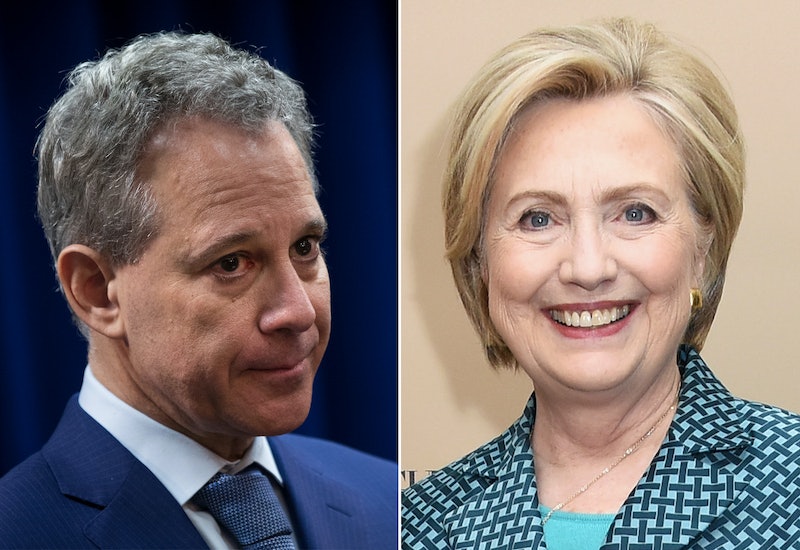 New York Attorney General Eric Schneiderman is out after The New Yorker published bombshell allegations that he had assaulted multiple women, so of course the speculation has already begun as to who will step into the job next. In answering the question of who will replace Eric Schneiderman, some people are saying Hillary Clinton should. Due to multiple issues with Clinton as a potential pick, though, it's almost certain that those people's dream will never come true.

Clinton, however, is unlikely to come up as a serious contender in the discussion, and several Twitter commenters have laid out the reasons why. Her supporters think that she'd be the perfect person to take on Trump in the state court — and she certainly has the legal know-how to do it, according to a biography of her by CNN. The problem isn't with her experience, but instead of the entanglements that she'd bring to any new political position that she took.

First of all, Clinton has been a lightning rod for criticism for as long as she's been in public life. "I see calls to appoint @HillaryClinton to NY AG office," wrote one Twitter user. "While she would be excellent in this roll, this would be rightwing rocket fuel. If you support, please re-think this. The @gop will propagandize this, all control of the investigations will be lost."

Those who would support her for the position might agree with the Twitter user who wrote the following: "I know it's not going to happen, but imagine Hillary Clinton replacing Eric Schneiderman as New York attorney general and indicting Trump's ass."

While the image may be tempting, there's a practical issue with it — namely that Clinton, because of preexisting conflicts of interest, would have to recuse herself from anything regarding her former presidential campaign opponent. "One more time for people in the cheap seats: No Preet Bharara. No Sally Yates. No Hillary Clinton," wrote another Twitter user. "If they were the NY AG, they would need to recuse themselves from anything involving Trump. Putting any of those three in that position is pointless."

We've already seen some recusals during the Trump administration, like for example Attorney General Jeff Sessions, who has recused himself from anything related to the Trump/Russia investigation because of his involvement in the campaign. Hillary Clinton, while not personally involved in any of Trump's political of business endeavors, endured extraordinary political attacks from Trump during the campaign and even now, over a year after the election. Any investigation she carried out involving Trump — or, for that matter, any investigation that her office carried out involving Trump even if she were recused — would thus seem biased to Trump's defenders.

Instead, the Democrat-controlled state legislature will most likely seek to appoint someone who would have absolutely no conflicts of interest when it comes to investigations of the president. That person, unfortunately for her supporters, is not Hillary Clinton.