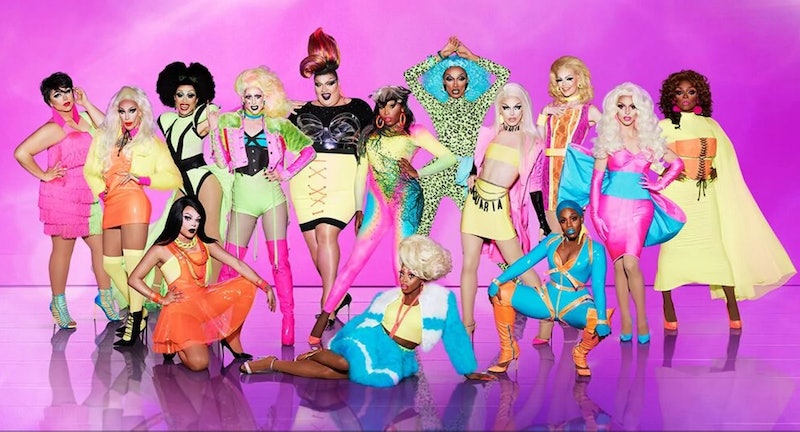 It seems like just yesterday that 14 queens made unforgettable entrances into RuPaul's "You better werk" room to kick off Season 10 of RuPaul's Drag Race, which became one of the show's most iconic seasons to date. So it was incredible to see them all come together once again to film a truly gag-worthy finale at the The Theatre at Ace Hotel in Los Angeles. From iconic guest stars galore, to a reflection on a decade of Drag Race, to a herstory making three-way lip sync battle to determine the winner of the crown, the episode provided a spiritual experience to say the least. So, in the end, who won RuPaul's Drag Race Season 10? It was a close call.

After an epic three-tiered lip-sync bracket that eliminated Asia O'Hara, the final stage unexpectedly welcomed not two, but three queens to lip sync for the crown: Eureka O'Hara, Aquaria, and Kameron Michaels. And after an overwhelming, fierce battle to Jessie J, Nicki Minaj, and Ariana Grande's "Bang Bang," Ru announced Aquaria as the winner of Season 10.

This season was full of the unexpected, so fans probably should've seen a curveball coming from Ru. But it would be wrong to say the room wasn't shocked to hear that after battling for a spot in the final two, Eureka and Aquaria were both given RuPaul's blessing to move on. Originally, the top four queens were to be split into two pairs who would compete to be in the final two; those two would then compete for the crown.

After the spin of a wheel adorned with the fishy faces of all four queens, Kameron was tasked with choosing her competitor. She chose Asia, who was eliminated after their butterfly-ridden battle. That's right: Asia was harboring live butterflies in her bracelets and bra-turned-net, and she released them onstage during her performance. Sadly, the move didn't quite go as planned, and it wasn't enough to keep her in flight.

So, after Kameron led Asia to her demise, that left Eureka and Aquaria to compete. And as it turned out, Aquaria got the save she was afraid she'd lost after Ru kept both members of the bottom two, Eureka and Kameron, from elimination in Episode 9. "Shantay you both stay," Ru said to the queens in front of a live audience. And for the first time in Drag Race herstory, three queens were up for the crown (and scepter — yeah, they get one of those). So they "assumed the position" to lip sync for their lives one last time.

Ru was right to give these three queens a chance to fight for the crown, because they all turned. it. out. Once again, it was a close call, and this time, Ru couldn't come to anyone's rescue. “This season will go down as one of the most competitive in Drag Race herstory. And still, Aquaria’s many talents distinguished her from the field of amazing queens,” said RuPaul in a statement. “This is the dawning of the Age of Aquaria. I can’t wait to see what she does next.”

Just like she said she would, Aquaria officially proved that she has what it takes to be the next reigning queen of drag. “Finally making it to the top of the most influential drag platform of today is proof that no dream is ever unachievable if you have the passion, resilience, love, and work ethic to devote your life to that dream,” said Aquaria in a statement. “Drag will always be a dynamic and powerful art form and it is my duty now to honor the artists who have come before me while continuing to pioneer my own path and history by being open to growth and change as a human and a drag superstar.”