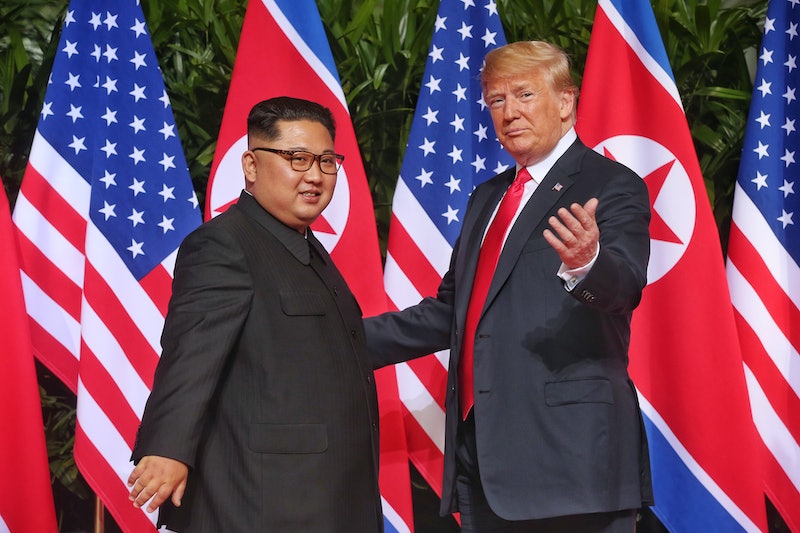 President Donald Trump took a gamble when he agreed to meet Kim Jong Un during the North Korea summit in Singapore on Tuesday. The two leaders had spent the winter trading insults and threatening military strikes, but then stunned the world by agreeing to come to the table for an unprecedented try at diplomacy.

"This is like the ultimate foreign policy Rorschach test," Jenny Town, a research analyst at the Stimson Center and the managing editor and producer at 38 North, tells Bustle. "Everyone who's been watching this came away with a much different picture of what just happened here."

The summit between Kim and Trump — and the winding path that led to it — touched more than just the two power players at its center. Regional allies like South Korea and China have a stake in the outcome. And members of Trump's administration are flexing diplomatic muscle in a way U.S. officials never have before, and in a way that could shape Trump's legacy and impact on the world order.

Whether the risk paid off will take time to judge — but analysts are already identifying a few winners who came out on top thanks to the historic summit.

Kim Jong Un: A Win On The World Stage

North Korean leader Kim Jong Un walked away from the summit with a win his country has been seeking for three generations. Amid a backdrop of U.S. and North Korean flags, Kim shook the hand of a current American president — and with that, gained the recognition on the world stage his country craves.

"The idea that he's basically now a political rockstar, with the reception that he got in Singapore, taking selfies with the prime minister, having people kind of fawning over him, trying to get pictures of him — the optics of that really play to all of Kim's interests," Town says. "[That] certainly has boosted his confidence and also boosted his negotiation power going forward."

"The North Koreans didn't really have to give us anything, and we gave them something that was really important to them, which was qual footing on a global stage."

Alexandra Bell, senior policy director for the Center for Arms Control and Non-Proliferation, tells Bustle that North Korea didn't give up much to get the validation it wanted.

"The North Koreans didn't really have to give us anything, and we gave them something that was really important to them, which was qual footing on a global stage," she says, noting that promises to freeze the country's missile and nuclear testing programs had been obtained by the U.S. before. While the North Koreans received praise last month for returning American hostages, Bell points out that they're guilty of taking them in the first place — and "they have repeatedly used that tactic so that they can use it as a bargaining chip later."

President Trump ran on a campaign promise to shatter norms in Washington, and experts say his outreach toward Kim is earning the 45th president major points among his supporters.

"This is going to play very well to Trump's base," Town says. "This is what we expected from him going in, that he would walk away with something that he was happy with, and that Washington and the rest of the community would be left scratching their heads and wondering, did something just happen?"

She says that while the declaration Trump and Kim signed does include the word "denuclearization," it's a stretch to say that that's actually been negotiated, and that the devil is in the details.

"This is what we expected from him going in, that he would walk away with something that he was happy with, and that Washington and the rest of the community would be left scratching their heads and wondering, did something just happen?"

"The words are not implementable," Town says. "You still have to work out the plan and the details and the measure of how to get there and how to achieve that. That's what's missing, but its not missing to the people that are his base."

Experts have suggested that the United States' preferred outcome — complete, irreversible, and verifiable denuclearization — could take a decade to complete, even if the North Koreans were to agree.

"I'm worried that the president is setting himself up for disappointment in terms of how slowly this process will move," Bell says. "I worry about the president's patience and his tolerance at the way these things tend to drag on and at times even get derailed."

Mike Pompeo, who served as a congressman from Kansas until Trump's inauguration, has enjoyed a meteoric rise within the administration. As CIA chief, he secretly met with Kim to pave a way toward negotiations, and was rewarded by becoming secretary of state after Rex Tillerson's departure. Despite competing power circles on Trump's foreign policy team, Pompeo has "been the one leading this process," Town says.

"I think this sort of boosted some of the confidence back into Pompeo's authority and Trump's confidence in Pompeo," Town says, especially since National Security Adviser John Bolton appeared "sidelined at the very end of the table and not close to Trump" during the meeting.

"I think this sort of boosted some of the confidence back into Pompeo's authority and Trump's confidence in Pompeo."

Bell thinks Pompeo deserves credit for keeping the talks on track, even after Bolton ruffled North Korea by advocating for the "Libyan model" of denuclearization, which resulted in the ouster of that country's leader. The talks also went on despite Trump canceling and then reinstating them with just weeks to go.

"He deserves credit for that," Bell says. "But... he is a person who has a relatively thin background in terms of diplomacy and more specifically, on nuclear policy. It's only going to work if he empowers the technical experts at the Departments of State, Energy, and Defense. They're the ones who are going to help deliver a deal."

Now that Trump and Kim are on speaking terms and have developed the beginning of a relationship, the threat of war is down — and that's good news for neighboring South Korea.

That's why Barbara Slavin, director of the Future of Iran Initiative at the Atlantic Council, calls South Korea "a short-term winner," but she notes that the country could be "a long-term loser if North Korea retains its nuclear and missile capabilities."

Back in December and January, when Kim and Trump were calling each other "dotard" and "Little Rocket Man" and trading barbs over whose nuclear button is bigger, it may have been hard to foresee the friendly "getting-to-know-you" summit that would unfold in Singapore a half-year later. Experts say the 180-degree turn is thanks to South Korean President Moon Jae-in, whose views his own election as a mandate to bring peace to the Korean peninsula.

"It was just incredible to chart how far President Moon's proactive engagement with all the parties has come," Catherine Killough, a fellow at the Ploughshares Fund, tells Bustle. "Moon got the process going with an Olympic truce, he got the U.S. to agree to suspend military exercises during the Olympics, he got his joint [South Korean and North Korean] Olympic team, and an inter-Korean summit."

"Moon got the process going with an Olympic truce, he got the U.S. to agree to suspend military exercises during the Olympics, he got his joint [South Korean and North Korean] Olympic team, and an Inter-Korean summit."

While the South Korean government was reportedly blindsided by Trump's decision to suspend joint military exercises, which the U.S. and South Korea carry out with regularity, Killough considers the move surprising but not problematic.

"It's not giving too much away because it is reversible," she says, citing a similar move by the U.S. government in the 1990s. "It's not that scandalous, so I'm encouraged by it, especially if it really means that the North is going to take concrete steps toward denuclearization."

It's unlikely the International Olympic Committee could have predicted the historic summit when they chose Pyeongchang as the host city for the 2018 winter Olympics in 2011. But Moon seized the opportunity presented to him as leader of the host nation, ("at great political risk to himself," Bell notes), and achieved results Tuesday.

"Had the Olympics not happened this year, would we have had this opening?" Bell says. "I don't know."

For China, North Korea's most influential ally, the outcome of Tuesday's summit is a chance to get back in on negotiations as a power player in the talks to come.

"China wants to be a part of that peace process," Town says. The country was not invited to take part in the bilateral summit.

"The commitment to the process without coming up with a solution means that there's still room fore negotiation and that presumably they would want all the relevant parties involved," she adds.

The tiny host country to Tuesday's landmark summit is getting credit on the international stage for walking a political tightrope between the U.S. and North Korea. The country is rare in that it has diplomatic ties with both nations.

"I've always thought that Singapore is the perfect place to hold this summit because it's not exactly a democratic society," Killough says, noting that censorship is high. "At the same time, it's one of the largest global economies and at least from the exterior, it looks very much like what Trump is attracted to in terms of skyscrapers and clean, modern city life."

Singapore is also the safest nation in Asia. As a further boost to its credentials, the country agreed to shoulder the costs of the summit. It's likely to be looked on favorably by Trump and Kim in the future.

Thanks to the summit, Kim has cultivated a direct line to Trump and even a possible invitation to the White House. Now, his chance of easing the international and U.S. sanctions that have crippled his country's economy is closer than ever. That would fulfill a main goal of Kim's and a promise he telegraphed to his people in his most recent New Year's address.

"The North Korean state newspapers and their coverage of this summit is a really good indication of what Kim is trying to show the Pyongyang elite, which is him stepping out onto the world stage, Killough says. "He's not shying away from what else is out there and the potential he could bring back to North Korea."

Military Families: An "About Time" Win

"That was a really interesting addition," Killough says, "and I think Trump during his press conference suggested that was a last-minute decision." She says while North Korea has recovered the remains of American service members in the past, she doesn't know how "willing and open the North Koreans will be."

"I'm wondering whether it'll happen behind closed doors, or whether the North Koreans will let Americans in" to aid the process, she says.