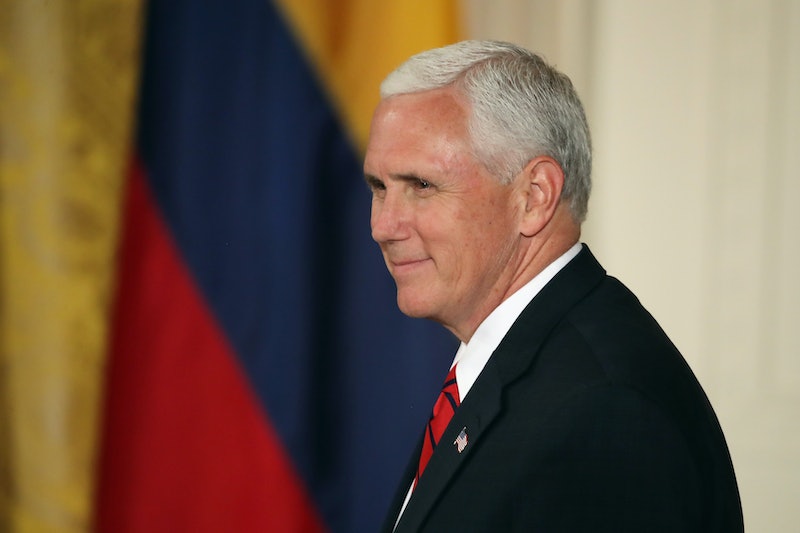 Talk of impeachment in Washington has escalated, thanks to recent revelations about President Trump's actions, including the looming claim that he pressed then-FBI Director James Comey to drop the investigation into former White House National Security Adviser Michael Flynn. As Democratic and now even some Republican members of Congress continue to raise the topic of impeachment, people have begun placing bets online as to whether or not Trump's presidency will last a full four years. But as talk of impeachment continues to mount, so, too, have questions about how the impeachment process works. While it's well known the vice president succeeds the president in case of impeachment, who would become vice president if Trump were impeached?

If — and this still remains a big if — Trump were to be impeached, the order of succession outlined in the U.S. Constitution and the Presidential Succession Act of 1947 dictates that Vice President Mike Pence would replace Trump as president. As for who replaces Pence as vice president, that, too, is outlined in the Constitution.

The 25th Amendment stipulates that "whenever there is a vacancy in the office of the Vice President, the President shall nominate a Vice President who shall take office upon confirmation by a majority vote of both Houses of Congress." Should Pence become president, his first action as commander-in-chief would likely be nominating someone to serve as his vice president. Both the Senate and the House of Representatives would then have to confirm his nominee before he or she could be sworn into office.

With talk of Trump being impeached being just talk now, it's impossible to know who Pence might nominate as his vice president should he be forced to assume the role of president. Would he opt to elevate Speaker of the House Paul Ryan to the role of vice president, or would he nominate a fellow Tea Partier like Sarah Palin? While too soon to tell, it's important to remember that whomever Pence might nominate to succeed him as vice president should he become POTUS, could also, according to the presidential order of succession, potentially succeed him to the presidency.