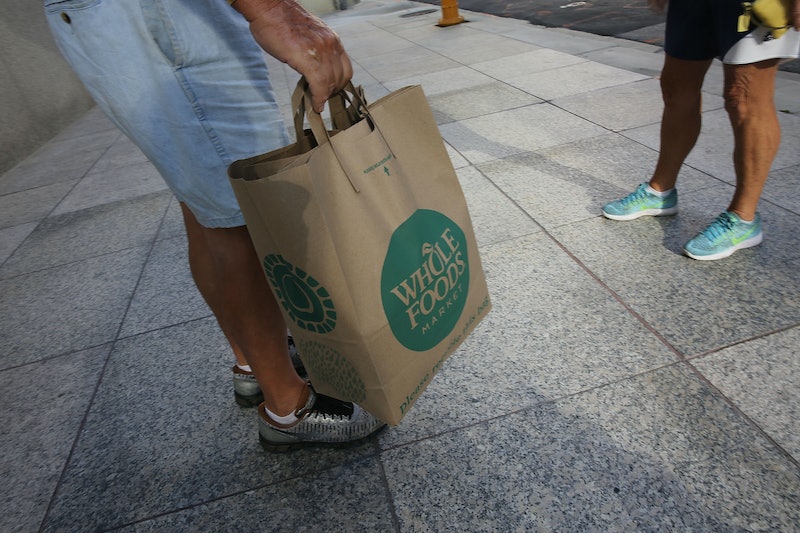 As summer approaches, so does peak straw season. For most people, iced coffees, teas, and juices will be slurped through straws. But as concerns over plastic pollution and its harmful effects on the environment grow, more and more chains are creating initiatives to limit plastic waste — with plastic straws usually being the first thing to go. On May 20, Whole Foods announced that it will ban plastic straws and take other initiatives to reduce single use plastics in stores in the U.S., the United Kingdom, and Canada by July 2019.

The company says it is one of the first major national supermarket chains to commit to banning plastic straws, and the move is in response to customer demands for more environmentally-friendly alternatives. The company formally announced that they’ll also be switching to smaller plastic bags this year, along with replacing plastic rotisserie chicken packaging with new bags that use roughly 70% less plastic. Whole Foods stated that these major changes will help eliminate roughly 800,000 pounds of plastic waste per year.

“We recognize that single-use plastics are a concern for many of our customers, Team Members and suppliers, and we’re proud of these packaging changes, which will eliminate an estimated 800,000 pounds of plastics annually,” said A.C. Gallo, President and Chief Merchandising Officer at Whole Foods Market, in a statement.

The changes aren’t exactly a surprise: the Amazon-owned company ceased providing disposable plastic grocery bags from all its stores as early as 2008, replacing them with paper bags and reusable plastic totes. And though the plastic straws will no longer be present at the grocery chains’ Allegro coffee bars, cafes, and juice bars, recyclable and compostable paper straws will be available for customers upon request. Customers with disabilities will also be able to request plastic straws as needed, the press release said.

Some reports estimate that plastic in the ocean will outweigh fish by 2050. On top of the amount of waste, plastics don’t biodegrade, eventually breaking down into tiny pieces called microplastics that can re-enter the food chain, noted the the United Nations Environment Programme. And according to The New York Times, straws only make up “a small percentage” of plastic pollution.

Still, Whole Foods is just the latest food vendor to join the cause: in July 2018, Starbucks announced that it would no longer have plastic straws at any of its locations by 2020, redesigning their cold drink cups with sippy cup-like lids and offering eco-friendly plastic straw alternatives. As USA Today reports, McDonald's also unveiled plan to switch out plastic for paper straws in the chain’s U.K. and Ireland locations. Cities including Seattle and Malibu have also banned or limited the availability of plastic straws within restaurants.

While eliminating straws isn’t necessarily the environmental cure-all many advocates purport it to be, it can be a helpful first step on the path to sustainability. “I think a lot of people feel overwhelmed by the magnitude of the plastic problem,” Diana Lofflin, the founder of StrawFree.org, told The New York Times for a March article on cities banning plastic straws. “Giving up plastic straws is a small step, and an easy thing for people to get started on. From there, we can move on to larger projects.”

More like this
The 8 Best Fridge Organizer Bins To Tidy Everything From Produce To Drinks
By Rachel Dunkel
On TikTok, Tinned Fish Date Night Is The Latest Viral Food Obsession
By Emma Carey
20 Smart Devices Under $35 That’ll Change The Entire Vibe Of Your Home
By Emma Carey
7 Dyson Vacuum Dupes Under $200
By Michelle Toglia
Get Even More From Bustle — Sign Up For The Newsletter