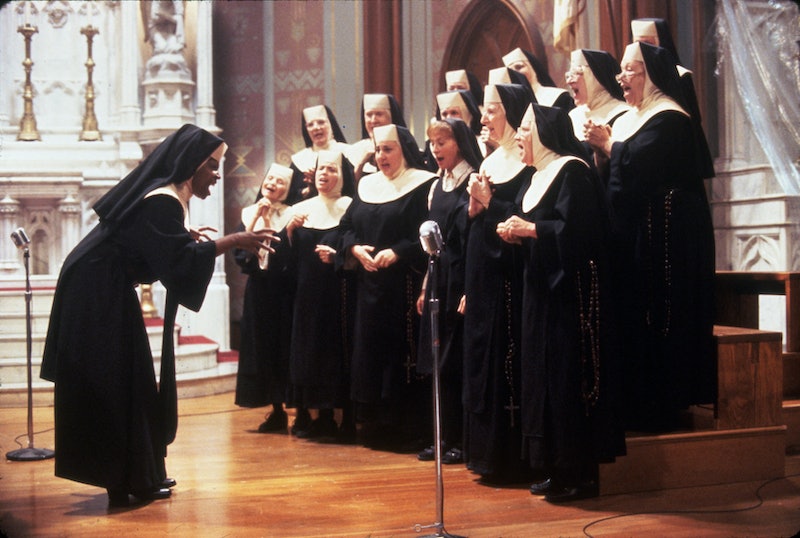 The days are darker and bleaker, and we can barely step outside without getting drenched or feeling like it's -10 degrees. But I have some news that just might brighten up your Autumn. Whoopi Goldberg and Jennifer Saunders will star in the London West End show Sister Act: The Musical next summer and I, for one, could not be more excited.

Yep, you heard that right, veteran comedy actors Goldberg and Saunders will grace the stage at the Eventim Apollo theatre for a limited run of Sister Act. Saunders will play the role of Mother Superior, originally played by Maggie Smith, and Goldberg will be reprising her role of Deloris, who she made famous back in 1992. The Evening Standard reports that Goldberg said "The original Deloris is back, a little older, a little seasoned, but really still kind of out there."

London Theatre 1 reports that the producer of the show Jamie Wilson has said that it won't be an exact replica of the film, which saw Deloris enter the witness protection and move into a convent, but rather a "newly adapted production." He continued:

"The addition of Jennifer means that Sister Act truly promises to be the ultimate night of laughs and smiles with two comedy greats. I’m also thrilled that Brenda Edwards, who has been so instrumental in Whoopi agreeing to return to the stage, has been able to schedule her TV commitments so she can play Deloris on Thursday matinees. It really is going to be a brilliant summer."

Sister Act: The Musical will be on stage for just 39 performances from July 29 to August 30, 2020, so you'll have to be quick if you want to grab tickets.

As well as the new London run, What's On Stage report that there will also be a UK tour in 2020 with X Factor star Brenda Edwards filling the role of Deloris. Brace yourself, sisters!