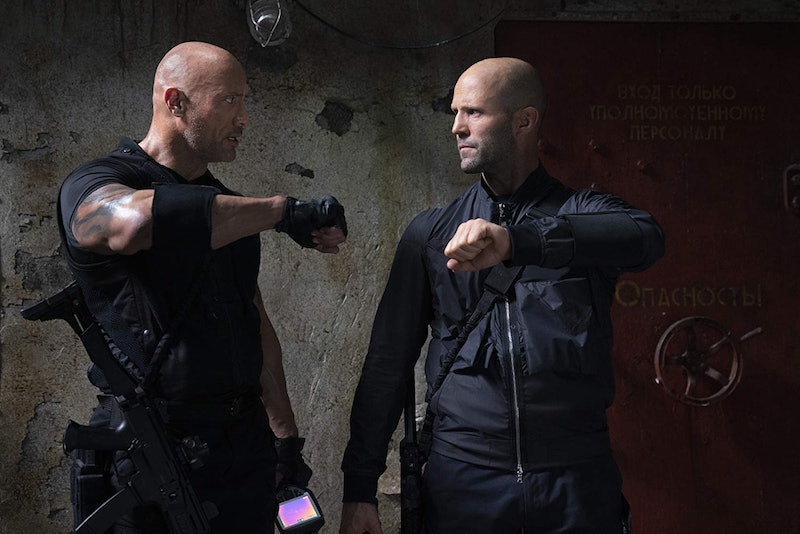 Major spoilers ahead! Hobbs & Shaw, the first spinoff film from the Fast & Furious franchise stars actors we already know from the Fast movies, Dwayne Johnson and Jason Statham, who are reprising their roles as Luke Hobbs and Deckard Shaw. But the film is also an opportunity to introduce new characters to this cinematic universe. Aside from Idris Elba's superhuman villain character Brixton and Shaw's MI6 agent sister Hattie, there's a new CIA contact played by none other than Deadpool himself. And Ryan Reynolds's Hobb's & Shaw role isn't just a surprise for fans and a fun cameo — it could hint at the future of the franchise too.

Entertainment site We Got This Covered reported the rumor that Reynolds was set to make his Fast film debut back in May. At the time, the online publication's unnamed source was already able to reveal about Reynold's role as "a CIA agent who has a bit of history with Hobbs and first recruits Johnson’s character to help him stop Elba’s supersoldier," which is exactly who Agent Locke is introduced to be.

In the film, we don't really get an exact play-by-play of Locke and Hobbs's history, but we get a sense that the two have worked together quite a few times. While the CIA agent briefs Hobbs on the mission to take down Brixton and retrieve the dangerous virus threatening all of humanity, he also drops references to past missions, spending time with Hobbs in Rwanda, and working under the DSS (Defense Security Service). Locke consistently insists that he and Hobbs are the best of friends, calling the hulking lawman "Becca" or "Becky," as he claims Hobbs's full name is "Lucas Rebecca Hobbs."

Reynolds first expressed his interest in joining the spinoff project via Twitter, when Deadpool 2 director David Leitch announced that he would be directing Hobbs & Shaw. The actor replied, "You promised Deadpool was in this. You said I get to play the no-nonsense Police Chief, who yells at Hobbs for crashing his 58 valve Nissan Sentra into an Olive Garden. Put me in coach." And though Leitch never responded publicly, he obviously thought having Reynolds on board was a good idea.

Though Locke doesn't really get into the actual action in the middle of the film, he does have a huge role in the post-credits scenes, hinting that we may see him again in the event of a Hobbs & Shaw sequel. In the end, he makes a call to Hobbs while bloody and injured, seemingly running away from someone. He tells the expert tracker, who just dropped his daughter off at school, about another mission regarding another virus threatening human existence, which would probably have him team up with Shaw again.

But there's also reason not to trust Agent Locke. In Hobbs & Shaw, though Brixton is presented as a physical threat and main antagonist in the film, something much bigger is coming for Luke Hobbs and Deckard Shaw. Brixton works for Eteon, a company that claims to seek ways to "improve" humanity through technology — but, obviously, they aren't going about it the right way if the first step is genocide. The leader of the company is never revealed, and only speaks through a distorted, digitally-altered voice. At some points when the Eteon head honcho does speak and the software slips, he does sound a little like Reynolds.

Whether Reynolds actually voices the mysterious enemy is still to be confirmed, especially since the actor isn't even on the public cast list. For now, we can put the theories to rest and just enjoy the added humor Agent Locke brings to Hobbs & Shaw. Whether a second movie is already in the works has yet to be determined, but maybe Fast & Furious 9 will give us a hint.