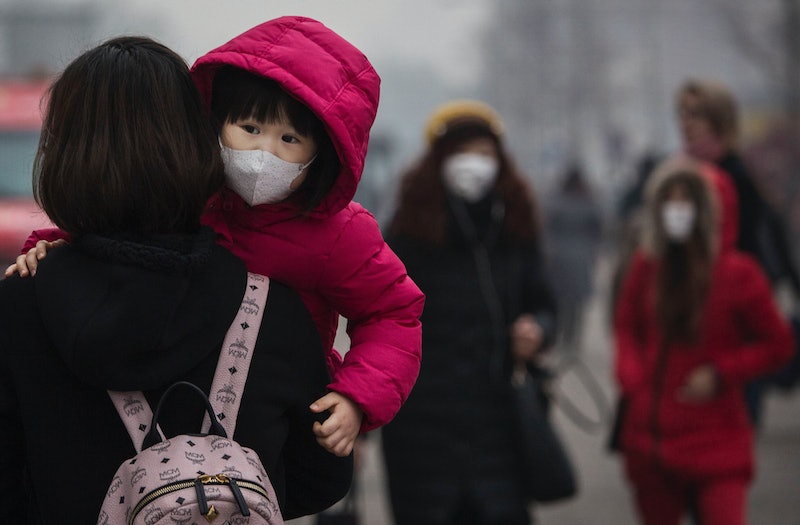 A new report from the World Health Organization (WHO) has revealed some staggering findings about pollution's impact on global health. The WHO's air pollution statistics suggest that up to 1.8 billion children around the world breathe potentially life-threatening polluted air every day. These findings demonstrate that much more needs to be done to combat air pollution worldwide.

On Monday, the WHO issued a press release about its latest report, which focuses on air pollution and child health. In summarizing the report's findings, the press released revealed the following disquieting statistics:

Every day around 93% of the world’s children under the age of 15 years (1.8 billion children) breathe air that is so polluted it puts their health and development at serious risk. Tragically, many of them die: WHO estimates that in 2016, 600,000 children died from acute lower respiratory infections caused by polluted air.

The press release also noted that children are more vulnerable to being affected by polluted air than adults, which is why there are such substantial risks associated with their exposure. As the WHO described, children breathe more quickly than adults, which means they inhale air pollutants at a faster rate. They are also shorter in stature and, because some pollutants are most heavily concentrated near the ground, children are more fully exposed to these pollutants.

Finally, because children are still in the process of development, any impact from pollutants has the potential to have more severe and lasting consequences. Dr. Tedros Adhanom Ghebreyesus, director-general of the WHO, noted that the level of risk at which air pollution is placing children is exceedingly problematic. "Polluted air is poisoning millions of children and ruining their lives," he said via the WHO press release. "This is inexcusable. Every child should be able to breathe clean air so they can grow and fulfill their full potential.”

The Guardian reported that experts who work on air pollution issues believe the WHO report highlights the urgent need to comprehensively tackle the problem. Mark Watts, the executive director of the C40 Cities group, which works with cities to counter air pollution, told the paper:

The moral and practical case for urgent, bold and far-reaching action to reduce emissions, including calling an end to the fossil fuel era, is now utterly irrefutable. ... Citizens are demanding action to protect their children. ... Now is the moment for governments, car manufacturers and other big polluters to step up.

For its part, the WHO is already taking steps to address the issue. As the organization reported on its website, it, along with several partners, is holding the first-ever Global Conference on Air Pollution and Health in Geneva, Switzerland from Oct. 29 to Nov. 1. The goal of the conference is to raise awareness about the links between air pollution and health as well as to "rally the world towards major commitments to fight this problem."

The WHO's recent report certainly sheds important light on the dangerous effects of air pollution, especially for children's health. Hopefully the awareness raised by this report and other related action initiatives will help contribute to the development of robust and quick-acting solutions to help reduce air pollution around the world.