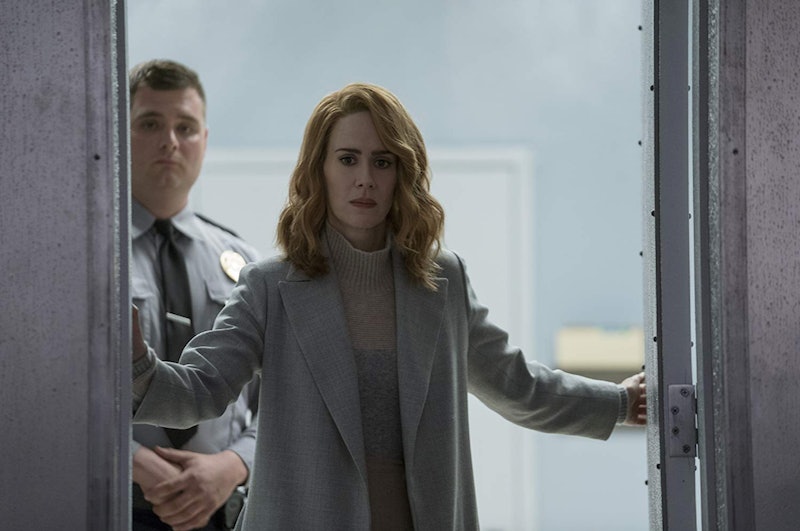 M. Night Shyamalan fans have been waiting for the Unbreakable and Split sequel Glass for quite some time, and the film is finally coming out on Jan. 18. In this one, villains Kevin Wendell Crumb's alternate personalties (James McAvoy) and Mr. Glass (Samuel L. Jackson), along with superhero David Dunn (Bruce Willis), are brought together for the first time, all thanks to psychiatrist Dr. Ellie Staple (Sarah Paulson). But who is this new character and why is she treating the protagonists?

Dr. Staple, who appears quite a bit in the trailers for the movie, specializes in treating people who believe that they’re superheroes, and says that she wants to help the men with what she believes to be delusions of grandeur. And she forces each of the men to question why they’ve taken on their identities as superheroes and villains, and whether it’s all in their head. For David, who didn’t come to terms with his own superpowers until he met Mr. Glass, this causes him to examine whether the past 19 years of his life are based on a lie. But, for the villains, being under Dr. Staple’s care means the challenge of finding a way to manifest their powers as they plan to escape.

Shyamalan also uses Dr. Staple as a way to add meta commentary on how superheroes have become such a huge part of pop culture since the release of Unbreakable. She references Comic-Con, as well as fandoms that fervently love superheroes, positing that that passion can make people go as far as to want to be them. And given how everyone would want to be a superhero if given the opportunity, it’s easy to see why she’d be wary.

Major spoilers ahead. But in true Shyamalan fashion, there’s a twist to this character. Dr. Staple is actually a bigger threat to the three protagonists than she’s initially believed to be. She’s part of a powerful unnamed group with matching mysterious shamrock tattoos that is dedicated to getting rid of superheroes. They believe that if superheroes are known to the public, more superheroes and villains will emerge. And Dr. Staple’s job consists of traveling around the world, stopping superheroes from being exposed.

When the three men escape the mental institution, Dr. Staple makes sure they’re killed, so the world won’t know of the existence of people with superpowers. But Mr. Glass, whose power is his incredible intelligence, knew that they’d meet a grim fate, so he had already come up with a plan to save footage from the security cameras and upload it, sharing proof that superheroes do exist. Dr. Staple, who thought her plan was fool-proof, figures out what Mr. Glass did when it’s already too late. And with the help of David’s son Joseph (Spencer Treat Clark), Casey (Anya Taylor-Joy), and Mr. Glass’ mom (Charlayne Woodard), the videos are widespread on social media.

That means that while the film already has two super villains with Mr. Glass and Kevin, the true villain is Dr. Staple. She’s the one who poses the biggest threat to the three main characters, both bringing the men together and being the one who causes the deadly end of the trilogy.