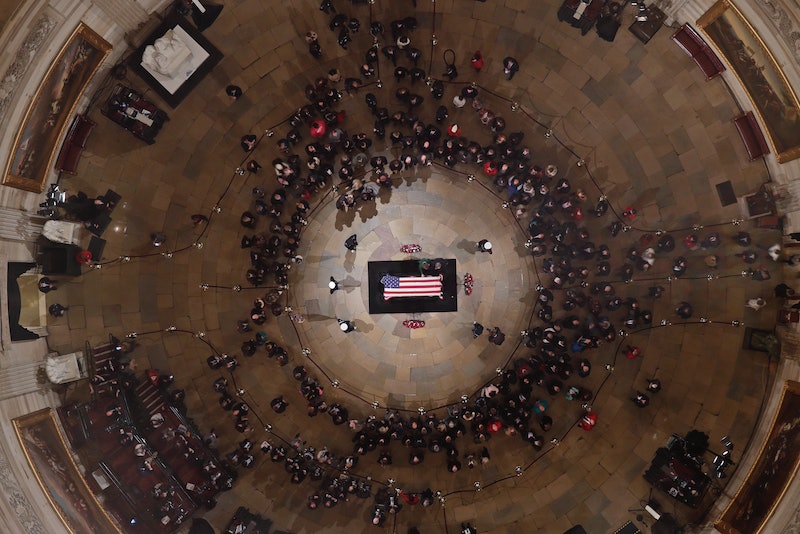 The 41st president's funeral on Wednesday isn't just going to be a national affair. For those who have wondered about who's going to George H.W. Bush's funeral, you might be surprised to know that the crowd will be filled with international politicians and dignitaries. At least 14 current and former world leaders will come to the capital on Wednesday to pay their final respects to the last president of the "greatest generation."

According to CNN, the following world leaders are scheduled to attend 41's funeral:

Of course, that doesn't necessarily comprise the entire community of international politicians, diplomats, and representatives who may attend tomorrow. It also doesn't include the American politicians who plan to pay their respects, as well.

Though it would be impossible to even estimate how many current and former Congressmen and women, as well as Senators, will be at the former president's funeral tomorrow, there is a good guess at how many presidents will be there.

CNN notes that former presidents Barack Obama, Bill Clinton, and Jimmy Carter will attend the funeral, as well as their spouses (though Rosalynn Carter will not be attending due to health reasons). As for the children of past presidents, here's who will confirmed be attending: Chelsea Clinton, Susan Ford Bales, Lynda Johnson Robb, Luci Baines Johnson, and Tricia Nixon Cox, as well as several of their spouses.

Even for the hundreds of millions of Americans who won't be attending Bush's funeral, the day might feel a little bit different. That's because Trump declared it to be a National Day of Mourning, which falls under the classification of a standard federal holiday.

As a result, almost all federal workers will have the day off, and virtually all federal agencies will be closed, too. Major U.S. stock markets including the New York Stock Exchange, NASDAQ, and the Dow Jones Industrial Average will all be closed, as well. CBS notes that the last day U.S. stock markets were closed in honor of a president was in 2007 for former President Gerald Ford.

Perhaps most importantly for most citizens, all post offices and mail services will be halted on Wednesday to "honor [the former President's] vast contributions to our country during his lifetime," per a statement by the USPS.

Services for Bush will be closed to the public, but they will be aired live on C-SPAN and covered by most major television networks. The service is expected to begin at 11 AM, ET.