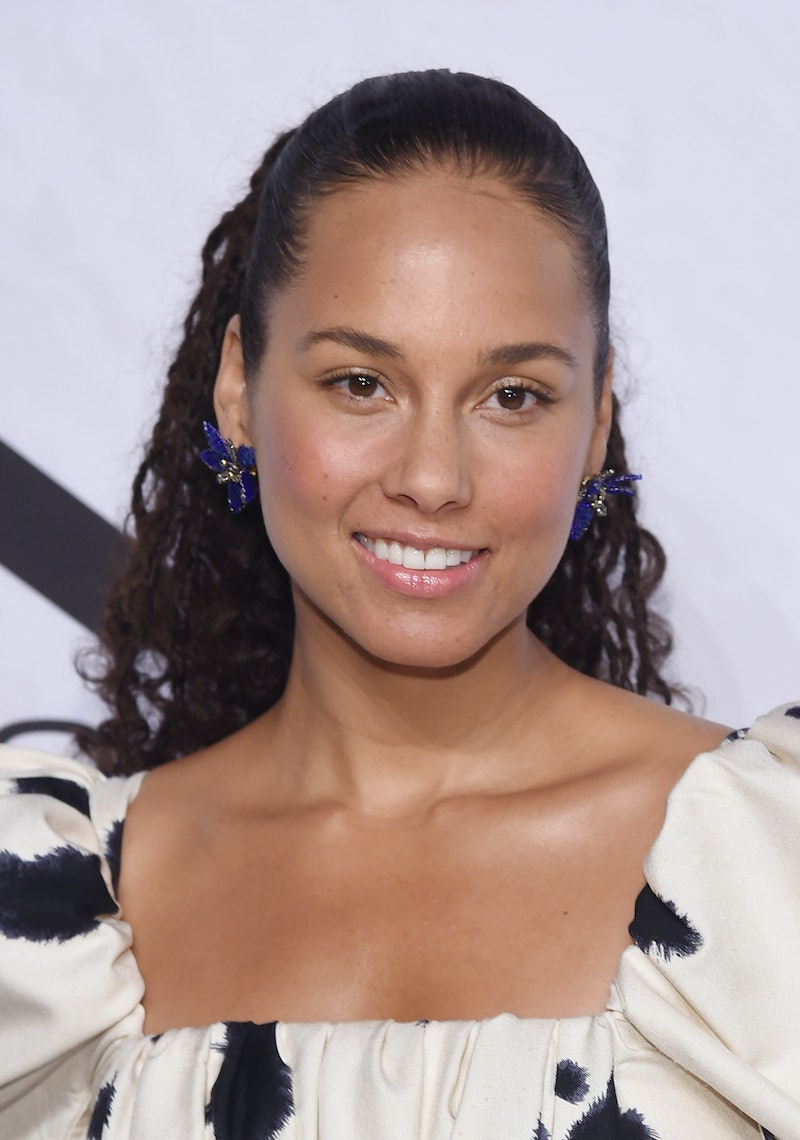 After this year, music's biggest night will never be the same — unless Alicia Keys hosts the Grammys every time from here on out. In a heartwarming, vlog-style YouTube video on Jan. 15, the knockout singer-songwriter announced that she'll be hosting the 61st Annual Grammy Awards. The video documents her receiving the call confirming the gig, a phone call with her mom revealing the big news, and a precious wakeup call to her husband during which she excitedly makes the announcement once more. She also tells her kids in the video, who frankly seem more interested in their toys. But one of them at least acknowledges the news by asking, "What's the Grammy's?"

Thankfully, Keys is very familiar with the awards ceremony, as she has collected 15 of the shiny gold gramophone statues over the last 20 years. In her video and the promo for the show, she proudly poses with all of them in a stunning crushed velvet suit. She said they still give her goosebumps every time she sees them.

"I know what it feels like to be on that stage," she said in a statement. "And I'm going to bring that vibe and energy. I'm so excited to be the master of ceremonies on the biggest night in music and celebrate the creativity, power and, magic."

In her YouTube video, she also said that she's excited to use this opportunity to show the world Alicia in 2019, to have fun, and "to give the light back — lift people up, especially all of the young women that are nominated. To me, it feels like sister vibes."

Wildly enough, though, she will be the first sister to host the show in 14 years since Queen Latifah did in 2005. James Corden hosted the past two ceremonies, and Keys already promised to show him up. "I called James Corden the other day and I asked him if he thought I was going to be better than him," she told People. "He was so shocked that I asked him, then he was like, 'Yeah! Like yeah you're going to be better than me!''

It's no secret that Keys is a timeless talent, so if Corden was good enough to get a two-year contract, she could easily snag more. Corden was quick to take the comedic route for his time on the stage, and Keys assured People that her approach is going to be very different.

"I've been thinking of so many things," she told the outlet. "It's been so fun and it's a process of course, because it's a three-hour show. I want everyone to feel relaxed but still have that excitement. I really want to do it in a way that has never been done before."

Still, that doesn't mean she's not going to be funny. "I'm a little funny!" she said. "Y'all sometimes think I'm real serious so I like this opportunity to continue to remind people that I love to have a good time."

She's working on her material with the help of her husband of nine years, Swizz Beatz, and others, but regardless of what they come up with, Keys will be captivating audiences from start to finish. And with the help of the majority-female nominees, she could easily make this year the most powerful Grammys yet.