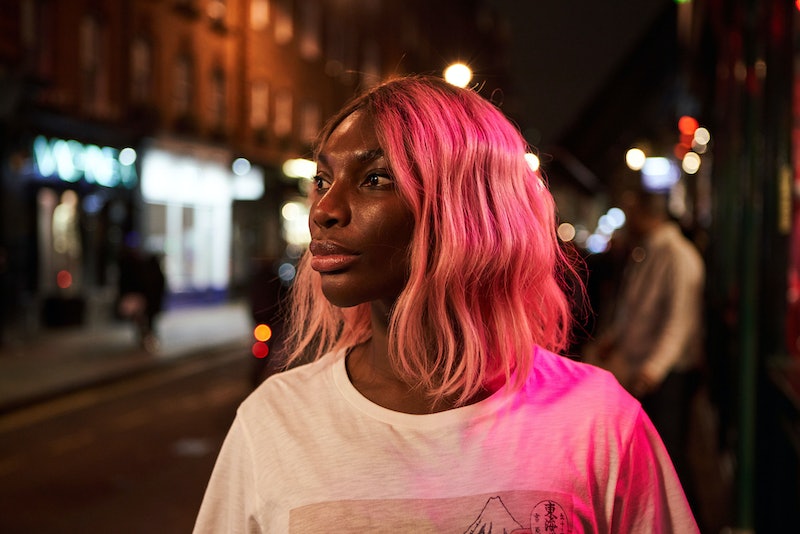 BBC / I May Destroy You

Michaela Coel's new show I May Destroy You is set to be must-see viewing. As well as writing, directing and producing the series, Coel stars as protagonist Arabella, a successful writer and survivor of sexual assault. The story centres around the aftermath of Arabella's assault, and the emotional trauma she experiences having been spiked and left unconscious with no memory of the attack. This part of Arabella's story is based on Coel's own experience of sexual assault, something she has previously spoken about openly.

Joining Coel in the cast is Weruche Opia (Bad Education, Inside No9, Sliced) as Arabella's friend Terry. Terry is a struggling actor dealing with the industry's inherent anti-Blackness. Her experiences of racism at a beauty industry casting unfold in episode two. It serves as a timely reflection on some of the issues around anti-Black racism that have been highlighted by the Black Lives Matter protests for George Floyd, Tony McDade, Breonna Taylor, and Ahmaud Arbery across the globe.

Arabella's friend Simon played by Aml Ameen (Yardie, Mazerunner) is holding down a highly paid job in the city – we meet Simon as he negotiates the decision to bring a third party into his marriage with wife Kat (Lara Rossi).

Co-produced by HBO and BBC Television, the series was a direct result of Coel's desire to write a drama series about consent, inspired by personal experience. Coel has since said that producing the series has been "the most satisfying experience of [her] entire life."

More like this
This First Look At 'The Gold' Shows Jack Lowden In A Whole New Light
By El Hunt and Sam Ramsden
Helena Bonham Carter Doesn't Think 'The Crown' “Should Carry On"
By Sam Ramsden
'Abbott Elementary' Fans Probably Missed This 'Parent Trap' Easter Egg
By Sam Ramsden
Everything To Know About The 'Daisy Jones & The Six' TV Series
By Maxine Harrison and Brad Witter
Get The Very Best Of Bustle/UK
Sign up for Bustle UK's twice-weekly newsletter, featuring the latest must-watch TV, moving personal stories, and expert advice on the hottest viral buys.