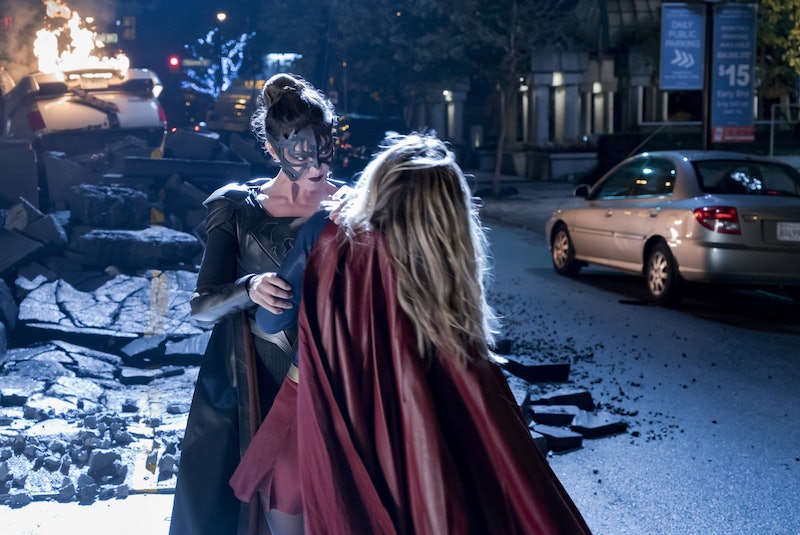 On the Season 3 midseason finale of Supergirl, Kara was shown being defeated in a one-on-one battle with the Reign, who is a “Worldkiller.” Clearly, Kara is going to need help defending her city and planet against a threat like that, and that’s where the Legion of Super-Heroes comes in. But, who's in The Legion of Super-Heroes on Supergirl? While a few heroes have been confirmed for the show, there could be even more added in the coming episodes of this season. Created in the far future of the 31st century, the Legion was a group of superpowered beings founded by Mon-El and Saturn Girl with the purpose to keep the peace and deal with threats both domestic and alien.

The three official team members of the Legion as will be shown on Supergirl are Mon-El, Saturn Girl, and Brainiac 5. And, each of them brings their own skillset to the group. Mon-El is from Daxam, which is near Krypton and the Red Sun, which means he has similar powers to Kara on Earth.

According to Variety, Saturn Girl will be played by Amy Jackson. Saturn Girl, as her name implies, is from Saturn — or technically its moon: Titan. Her powers are based in telepathy. She can read minds, utilize mind control, and also confuse enemies among other various uses of her telepathy.

Brainiac 5 rounds out the group of heroes we already know to be in the Legion. According to Inverse, he's played by Jesse Rath and will reportedly fall in love with Kara. His powers include an incredible intellect and the ability to craft gadgets and weaponry.

According to TV Line, Episode 10 (airing Jan. 15) is titled “Legion of Super-Heroes” and will be the first episode to air following the midseason finale. They couldn't come at a better time since Kara definitely needs help defeating Reign. The prominent inclusion of the Legion of Super-Heroes will not just be something to keep fans entertained for a few episodes, either. Katie McGrath, who plays Luna Luthor said in an interview with Supergirlfans.org that the Legion’s presence is “massive” in Season 3 and that while she doesn’t know the specifics, she thinks she’ll be dealing with those characters just as Kara will be. Chyler Leigh (who plays Alex on Supergirl) added similar feelings about the future of Season 3 in an interview with BuddyTV. “With the Legion coming in, it's sort of like you never have a down moment or a dull moment.”

The Legion in the comics is known to have a huge roster of heroes that have joined over the years. Along with the names you’ve already seen mentioned here, others include: Superboy, Live Wire, Cosmic Boy, Sensor girl, and literally dozens of others that SyFy once ranked from lamest to coolest. With such a plethora of characters to choose from, Supergirl can really bring in whoever they want to round out the team. Or, the show can choose to stick with the three they have for now. But, if more characters are brought in, that's sure to shake things up and help Kara in her battle against Reign in the second half of Season 3.

So, while we might not know when Kara will wake up within her Star Wars inspired healing chamber, it’s clear that backup is on the way for her — and maybe a few friendships (or relationships) will form from within that team. In any case, the Legion is likely to band together to stop Reign’s… reign, before it can even begin. After all, as the old Kryptonian symbol on her chest suggests, people are "stronger together."