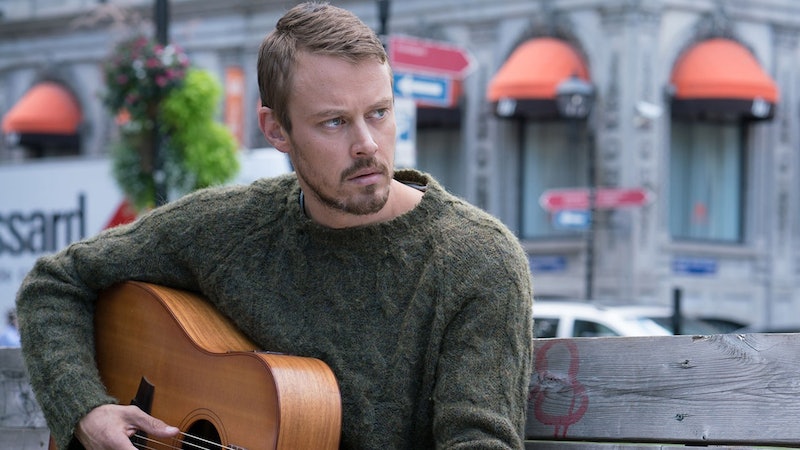 Meet John Tavner, the protagonist of Amazon Prime's new series Patriot. John would very much like to be a folk singer, but he's stuck working for his dad (played by Terry O'Quinn, who Lost fans will immediately recognize as John Locke). John hasn't yet recorded a hit song, so, for now, he'll have to stick with his day job as an undercover intelligence officer — but at least the family trade is interesting, right? When the series kicks off, John is assigned a "non-official cover" as a mid-level employee at a Midwestern industrial piping firm, so he becomes John Lakeman on Patriot and that's when the real fun begins. (Well, depending on your definition of fun.)

What goes into the process of adopting a new identity? Well, for John, the first step is pushing his competition in front of a truck. Apparently he only had one real competitor, because he lands the gig at the aforementioned industrial piping firm. Being in the CIA means wearing many hats, so John also jets off to Luxembourg to make a money transfer that'll rig the Iranian election (don't worry, his older brother makes the trip overseas with him just in case). Then, it's time to report for work — and John Tavner is officially John Lakeman for the forseeable future.

Will John Tavner totally change his personality when he adopts the alias of John Lakeman? Viewers will have to wait to find out — I just hope he doesn't ditch the guitar, because every spy comedy would benefit from a healthy dose of folk tunes. According to Uproxx, the piping company is the site where the nuke deal will go down. But, John Lakeman isn't very good at his new job and it doesn't go unnoticed by his boss — so his real challenge may be to not get fired before he's needed by the CIA.

Meanwhile, John Tavner is married and John Lakeman presumably is not. Although I suppose it could be argued that every job can be hard on families at times, John's wife is accustomed to going months at a time without seeing her husband — and there's certainly some tension because of it. To make matters worse, Tavner is also dealing with PTSD from a previous assignment. Being John Tavner and John Lakeman seems like it's going to be a major challenge for Patriot's protagonist — let's just hope his dad and bumbling older brother have his back.