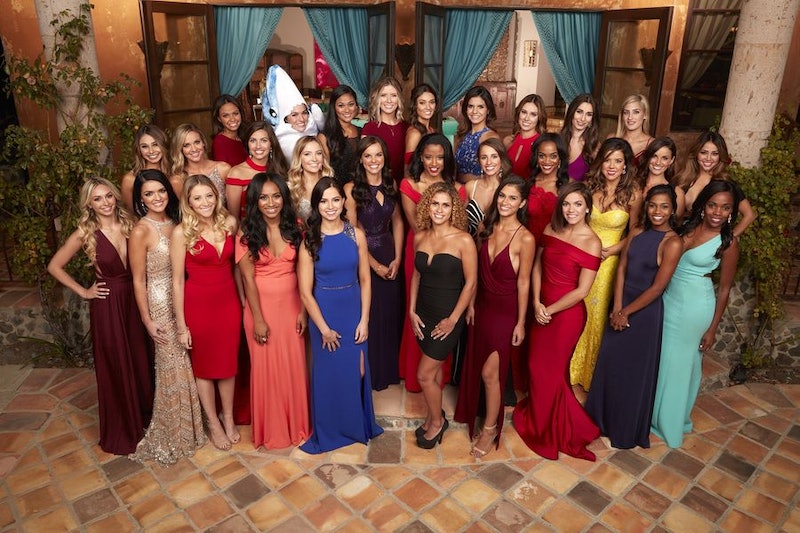 After starting his season with a whopping 30 women, Nick Viall's remaining Bachelor contestants are dwindling down week after week. He axed eight women in the premiere alone, which is the price of starting with more than the usual 25, I suppose. Then, in the second week's episode, Nick sent Liz home during the group date. It's always fairly unusual for a contestant to leave outside of a rose ceremony, but Nick proved right off the bat that he's not afraid to break the "rules" when it comes to getting rid of ladies he's just not that into.

You can follow along on Nick's ~journey~ to love with Bustle, as we keep this list up-to-date with all of The Bachelor's current competitors and those who have sadly been sent home to shill teeth whiteners on Instagram and await their Bachelor in Paradise casting calls.

Still In It To Win It

Eliminated From The Competition

Nick sent her packing after hometowns.

She got sent home during a one-on-one just before hometown week.

She told Nick she was falling for him, but he didn't feel the same so he sent her home Week 6.

Nick sent her packing during his second two-on-one date.

Our dolphin/shark has to find another fish in the sea after being cut during Week 6.

Sadly, this chef didn't make the cut and was sent home during Week 6.

Josephine was sent home during the sixth episode.

Taylor said her goodbyes during the two-on-one date.

Astrid failed to make much of an impression on Nick and was sent packing during the fifth episode.

She had a tearful goodbye during Week 4.

Week 4 proved to be Christen's undoing.

Nick sent her home early during a Week 3 group date.

She got axed Week 2.

Nick sent Liz home during a group date in the second week.

Week 2 became the end of the road for her.

This season's Olivia didn't make it quite as far as the Olivia on Ben's season. She got sent home on the first night.

She got sent home on the first night.

We barely got to know this night-one eliminated contestant.

One of two Jasmines, Jasmine B. got sent home on premiere night.

We barely knew Michelle — she was axed on night one.

Who will prove the champion in the end? We'll have to wait and find out.