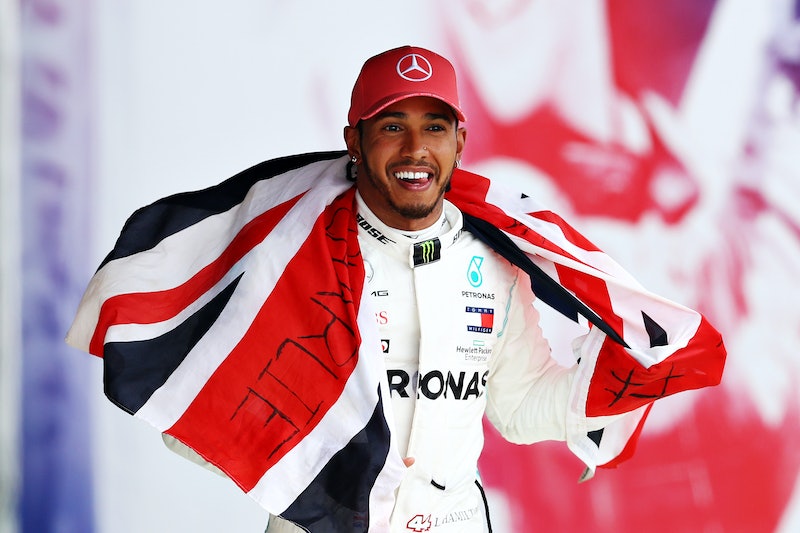 British Formula One champion Lewis Hamilton won yet another British Grand Prix this past weekend, making it his sixth ever. He has now taken over from fellow Brit Jim Clark, who had previously held the joint record with Hamilton for five wins. Along with the exciting Wimbledon men's final and GB winning the cricket, this was a *weekend* for British sport. But Lewis Hamilton isn't just known for his racing, but also his life away from the track, including his former relationship with Nicole Scherzinger. So who is Lewis Hamilton dating in 2019?

I've reached out to Hamilton's rep to find out if there is any information they can share, but they have told me that they don’t make public statements on the driver's private life.

It would appear the racing driver is currently not in a relationship. Back in March 2019, The Mirror reported that Hamilton was dating American model Jasmine Sanders, stating the couple were spotted dining together in Paris during fashion week. However, Hamilton took to Instagram to vehemently deny the two were a couple, instead explaining that they were simply friends, and criticising the media for jumping to conclusions:

"It's a sad world when a man cannot have female colleagues or friends without the media making it seem something it isn't," the athlete wrote. "All these years you've tried to discredit my name, discredit my image, I'm still here and rising. No matter what you do or say, I will continue to rise til the day I die. And no, there is no new flame so please stop attaching their name to me. Once again, fake news. Simply gave a friend a lift. When you one day see me holding hands with a woman, then you can write a new flame."

Hamilton's last known relationship was with ex-Pussycat Doll Nicole Scherzinger. As the Evening Standard reports, the pair "split in February 2015 after dating on and off for seven years."

The reason behind the split was never confirmed, but Hamilton told Top Gear magazine in 2016 that he can be known to put his love for cars and his career before the people he is dating (via Metro): "My cars are my babies. I used to say, when I had a girlfriend, 'I’m taking one of the girls out, so you can come if you want, but you come second when it comes to the cars.'"

According to the Evening Standard, while appearing on the Jonathon Ross show in October 2016, Scherzinger said: "I don’t see anything negative, I think it’s quite natural when people separate and go their own ways and you just have to be adult about it and just always wish the other person happiness, success and love like sincerely and I do."

Later, in 2017, Scherzinger spoke to Fabulous magazine and said (via Heatworld): "I was in that relationship for almost seven years. And I don’t like to fail at things. So I’m like: ‘I will make this work somehow!’ But sometimes we don’t realise that things just aren’t meant to be."

She continued: "As women, we tend to love the other person and give everything to them. But sometimes the other person — the man — tends to be quite selfish, so they’re thinking of themselves and doing what’s best for them and meanwhile we’re giving everything.

"When we start to lose ourselves and compromise who we are and our worth, that’s when we really need to re-evaluate things. We need to draw that line and make those boundaries."