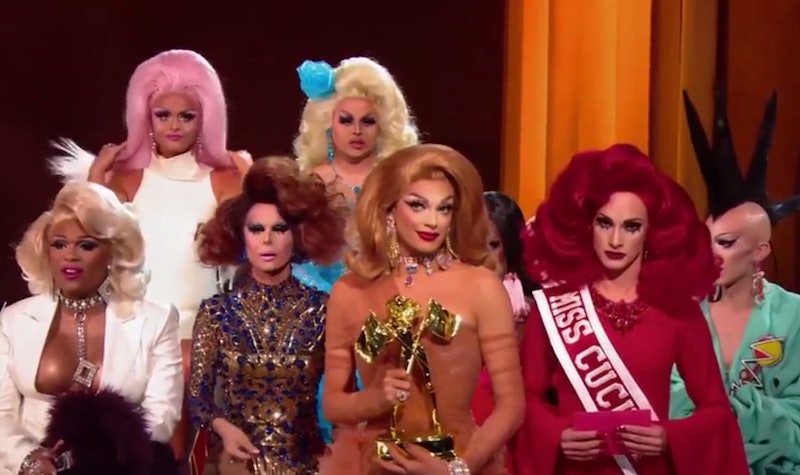 Season 9 of RuPaul's Drag Race has been an unpredictable delight. There have been highs, lows, shade, drama, and shocking lip-sync travesties in abundance. On Friday night, this season's bevy of talented queens reunited to pry open the library, and read each other for their respective drag sins during the show — and damn, did it get catty. The claws were officially out during the RuPaul's Drag Race reunion special, and they were the sharpest they've ever been. And though there was an ample supply of high tension and judgment from the very start of the show, the worst of it was saved for the winner of Miss Congeniality on RuPaul's Drag Race, who was announced during the episode.

Presented by the former winner of the accolade, Season 8 and 9's Cynthia Lee Fontaine, the Miss Congeniality prize was given to Valentina. And the library didn't just open for her, the doors damn near blew off the place. Accepting the award with the kind of Linda Evangelista realness that fans have come to worship from the queen, Valentina dedicated the win to her mom, and said, "Without her I wouldn't be congenial."

Behind Valentina, however, there were visibly some stern faces of shock, but more notable was Aja's reaction who pulled a face of pure, unadulterated disdain at the news before shouting, "What?" and then expressing her disapproval as to the recipient of the award. Speaking directly to Valentina, Aja said, "Congenial? I don't want to be the one, but ... I just don't feel like you should be Miss Congeniality."

In response to Aja, Valentina gracefully stated that she had been "kind to every single one" of the contestants, before vowing to be "kind to success." At which point a clearly rattled Farrah Moan jumped in on the situation, and brought up her own hurt at what she considered to be less than congenial behavior from Valentina. Sounding as if she was holding back tears, Farrah told the prize-winning queen,

Despite trying to calmly respond to the situation, including a rejected attempt to tell Farrah that she loves her, the atmosphere around Valentina's win continued to escalate. To the point that some queens rallied around Aja's subsequent suggestion that the Miss Congeniality title be changed to the apparently more apt title of "Fan Favorite." Ouch.

While on the show, Valentina appeared to be a fun, easy-going contestant who was more competitive than she was friendly with the rest of her drag sisters, which is completely fine. As we all know, it isn't RuPaul's Best Friend Race. However, it would appear that most of the complaints raised against Valentina have been regarding behavior following her appearance on RuPaul's Drag Race, beyond the documentation of the cameras.

Whether or not the rest of the contestants believe that Valentina is congenial enough to own the title of Miss Congeniality seems rather redundant, however. At the end of the day, all that matters is that her fans believe it, and that's why they voted for her.