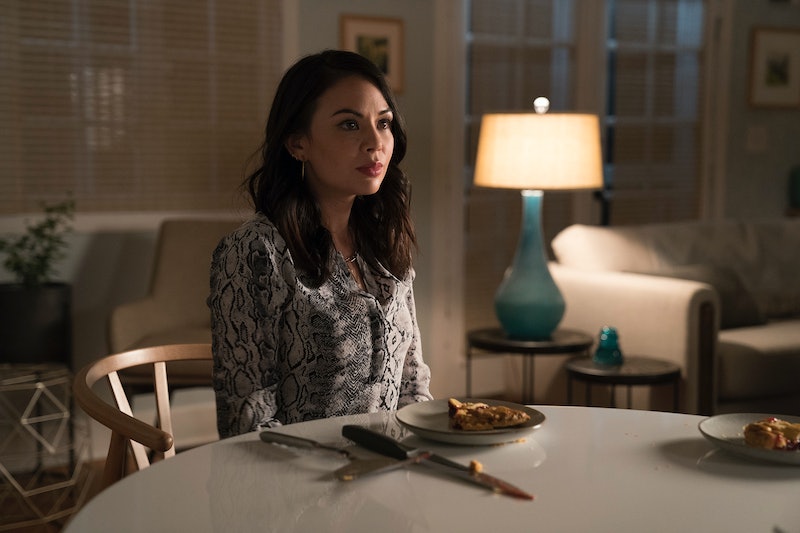 Spoilers ahead for PLL: The Perfectionists Season 1, Episode 1. The first episode of The Perfectionists left fans with a ton of questions, just like Pretty Little Liars used to do. One of the biggest mysteries off the bat (besides who killed Nolan, of course), is who Mona's talking to in the mirror on The Perfectionists. She has several conversations with what seems to be herself, but at the very end of the episode it was revealed that someone was on the other side of those mirrors.

Mona first converses with a mirror right after she greets Ali in her new home. "Alison's as determined as she ever was, don't you think?" Mona asks her reflection. In that moment, viewers are led to believe that Mona's had some sort of break from reality and is conversing only with herself. It happens again later in her car, when she asks her rear view mirror reflection, "I think I'm doing a really good job, don't you?" But it becomes clear by the end of the episode that someone was always on the other side listening to Mona.

After Nolan's murder, Mona rushes into a bathroom and stares at her reflection over the sink. "What the hell just happened?" she asks. "Was this our fault? Answer me, dammit." It's then that viewers see a woman on the other side of the mirror. She speaks into a headset, "Mona, go to your safe place now." The camera pans back on the headset woman to reveal that Mona isn't the only one being watched. All corners of Beacon Heights University are under surveillance, with numerous screens tuned in to different areas.

When Ali first arrived at BHU, she inquired about a box on her wall. Mona told her it was Beacon Guard, the security system for the school. And it seems to be watching from every angle if even mirrors are actually screens into people's homes, cars, and bathrooms. Viewers saw Nolan's mother request that surveillance be intensified on her son "BH5," in the days leading up to his eventual death, and Nolan was keenly aware that he was being watched. In a secret meeting with his sister, the two discussed the school's spying — and how it was only being used on a select number of students. If Nolan is BH5, who is BH 1-4? And are there more numbers after Nolan's? That's still unknown, because Nolan and his sister were only able to discover that the surveillance was occurring — but not why it was ordered.

In any case, Mona definitely seems involved in the spying in some capacity. She's aware that mirrors are being used as TV screens for the what appears to be the Beacon Guard headquarters and she's in communication with the people who work there. But she seems to have been left in the dark a little bit, because she never expected this to lead to Nolan's death. She seemed absolutely panicked that she could have somehow had a role in it via this surveillance. If she now needs to go to a safe place, it seems she may have indeed been part of what caused his death.

Nolan thought that the top of the building he was later pushed from was a safe space from the tracking — but he appears to be wrong. Maybe he didn't know that every mirror, large and small, are being utilized to track people at BHU. The only good news is that his sister doesn't appear to have been discovered yet, so maybe she can figure out the "why" of this spying in time to stop it from causing any more deaths.

As for Mona, who told Ali she came to BHU for start fresh and regain people's trust — well, she still has a long way to go if she's part of the team spying on them. But secrets have always been part of Mona's game. Things aren't any different on The Perfectionists, except that, this time, Mona isn't running the game. Nolan's mom and the team at the Beacon Guard HQ are. Mona may be in the know, but she's also been left out of some conversations judging by her genuine panic and confusion over Nolan's death. She's used to controlling her "dolls," but, on The Perfectionists, it seems she's being played too. Those innocent chats to herself in the mirror may have turned deadly for Nolan, and Mona needs to watch out before she could be next for knowing too much or messing up that big.